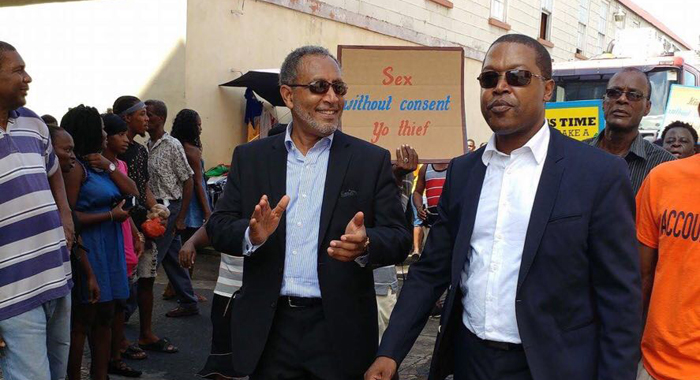 Leader of the Opposition, Godwin Friday has accused the ruling Unity Labour Party of being so skilled at “illegality, theft, impropriety, dishonesty, and skulduggery” that they were ill-prepared to defend themselves against the two election petitions filed by his New Democratic Party (NDP).

“The ULP had become so skilful in electoral illegality, theft, impropriety, dishonesty, and skulduggery, that they believed that all they had to do, was to ‘wash dey foot an’ come,’” Friday said, quoting the words that Prime Minister Ralph Gonsalves used over a decade ago to invite the nation to the re-opening of the refurbished Official Residence of the Prime Minister.

The opposition leader’s comments came as he addressed party supporters outside the NDP’s headquarters — Democrat House — on Murray Road on Friday, shortly after the court ruled that the election petitions can proceed to trial.

The NDP is challenging the outcome of the December 2015 general election in Central Leeward and North Windward and is asking the court to declare its candidates the winners or order fresh elections in those districts, which electoral officials say the ULP won as part of an 8-7 victory.

Friday said: “They said we should give up; we should forget what took place. They said we were crying over spilt milk; that we were called sore losers and called us every other derogatory term. However, we know that when the truth is on your side, you must persevere.  And so we did:  one year, six months and three weeks later, our petitions will finally be heard on their merits, in open court.”

Friday said that the evidence to support the NDP’s claim will be available for everyone to see.

“And I trust that those responsible for what took place in Central Leeward and North Windward on Dec. 9th, 2015 will be held accountable for their actions,” he said.

“Accountability seems to be a word and concept that causes a lot of heartache and sleepless nights for the leadership of the ULP mal-administration these days. Too bad for them, that’s not my concern. My responsibility as your party leader and as Leader of the Opposition is to represent the best interests of all Vincentians and to ensure that this ULP mal-administration is answerable to the people. The people are the ones who hold all the power in their hands. It has always been that way despite what some people in high offices may think, and we must insist in our words and by our deeds that it remains so.”

He said that having secured victory in court, the NDP “press forward to the trial of the petitions and to fresh elections.”

Friday said that the NDP is “prepared to chart a new course, a better path and a bright and prosperous future for all Vincentians.

“We will never give up on our mission. Against all odds, we will persevere and be victorious. Let us unite and build a nation that we can be proud of always, where the government is accountable to the people and where good governance becomes a way of life and, so, restore prosperity for all.”

Friday said that his party stands resolute in its determination “to restore democracy in St. Vincent and the Grenadines”.

“Perpetrators of undemocratic, corrupt and heinous acts on our blessed SVG will never find comfort or solace here. Justice is indivisible, Justice is timeless, justice must always prevail, so that one by one they are all brought to Justice. We go forward with the legal battle, but we can clear the air of doubt about the 2015 elections by calling fresh elections now! This is what the people want!” Friday said.