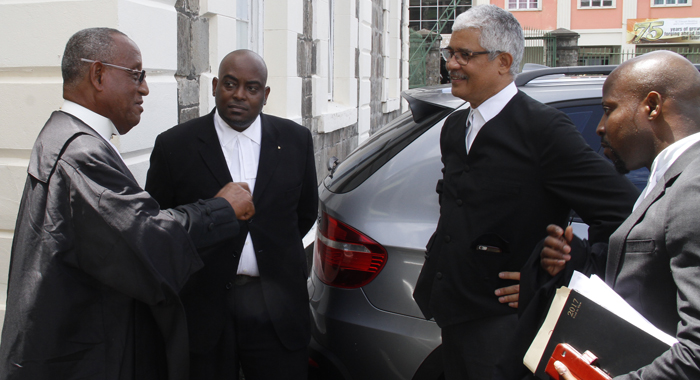 Lawyers for the petitioners and respondents chat outside the High Court on Wednesday. (iWN photo)

When the matter came up for hearing on Wednesday, it was adjourned to a date to be fixed by the Registrar of the High Court in the new law term.

Justice Esco Henry, who is presiding over the matter, also gave a six-point order outlining actions that the parties must take and their timeline.

Ben Exeter, who was the NDP’s candidate in Central Leeward in the 2015 general elections, has filed a petition challenging the outcome of the elections there.

His colleague, Lauron Baptiste, the NDP’s candidate in North Windward, has mounted a similar challenge in that district.

Electoral officials say those constituencies are among the eight won by the Unity Labour Party of Prime Minister Ralph Gonsalves to secure a fourth consecutive term in office while the remaining seven seats went to the NDP.

When the motion to inspect the ballot boxes and other election documents came up for hearing on Wednesday, there was a long delay to allow for three foreign lawyers who have joined the government’s team to be called to the Vincentian Bar.

After they were seated, the court having processed their documents, which the judge noted were “hurriedly filed”, Senior Counsel Douglas Mendez of Trinidad and Tobago, who this month took over from Dominican Anthony Astaphan, SC as lead counsel for the respondents, asked for an adjournment.

He said he was requesting an adjournment, hopefully, to later this month, to give the respondents an opportunity to file affidavits in response to the petitioners’ request to inspect the election documents.

The petitions, which have been before the court since December 2015, will go to trial after a ruling by Justice Henry on June 30 that they are not invalid, as the respondents had claimed.

After that ruling, Astaphan said he has been battling ill health for some time and cannot continue as lead counsel, since he also has a backlog in Dominica.

Mendez told the court that it was only after the June 30 ruling by Justice Henry that the parties knew that they had to proceed to the next stage.

He said he was approached not long after that ruling, but, when questioned by Justice Henry, said he could not recall the exact date when he was retained, but said it was one or two days after the June 30 ruling.

Prime Minister Ralph Gonsalves had announced on June 30 that the legal team for the respondents was in consultation with Mendez.

Mendez told the court on Wednesday that there hasn’t been enough time to take instructions from the respondents.

He said he was asking for a seven-day adjournment to be able to file affidavits and respond to the motion.

Lead counsel for the petitioners, Queen’s Counsel Stanley “Stalky” John, told the court that he had no objections to the seven-day adjournment, providing that the matter definitely proceeds then.

He noted that Mendez had referred to the petitions being before the court for more than 18 months.

John said he was making this point to say that a lot of time can be saved if disclosure is made.

But Justice Henry was having none of it and told John that that is a discussion that could take place in the corridors among the parties.

Kay Bacchus-Baptiste, who is lead counsel for Baptiste, said that his legal team intends to file a similar application to inspect the ballots.

John further told the court that submissions related to the application to inspect the ballots were first filed on March 4, 2016 and served on the respondents shortly after.

He said that while they were discontinued because of a ruling of the court, the new application would rely on the same submissions.

Mendez told the court that he was not aware of those submissions.

Justice Brian Cottle, who had later thrown out the petitions as improperly filed, had ruled that allowing the parties to inspect the ballot boxes would amount to a fishing expedition.

He had further claimed that doing so would allow the inspector to determine how electors voted, a claim that has shocked the nation, but upon which electoral officials have refused to comment.

The law terms end in July and the judge said that she has to attend the annual judicial conference from July 26 to 29, adding that she doesn’t think that the court can entertain the motion before the new law term.

Mendez also said that he had commitments in court in Trinidad that would make him unavailable for a few days towards the end of this month.

Among other things, by inspecting the ballot boxes, Exeter is hoping to determine whether 769 ballots from four polling stations in Central Leeward were validly cast.

The petitioners also want to determine whether the counterfoils for such defective ballots were endorsed by the initials of the presiding officer.

Exeter’s lawyers have laid out a number of grounds to support their motion, noting that their client has complained of undue return or undue election of Sir Louis Straker, who has been declared the winner of the Central Leeward seat.

They say that by inspecting the ballot boxes, it may be determined that Sir Louis was unduly elected or returned and that the election was void, or that he, Exeter, was duly elected and ought to be returned.

The lawyers are asking the court for an order for scrutiny and recount in respect of the defective ballots to which the objections were made by Exeter and/or his representative/agents.

A lawyer for the petitioners has told iWitness News that “the pivotal objective of the petitions is to establish that the form of the ballots was illegal and that as a result the sanctity of the secrecy of voting was compromised and that hundreds of illegally cast ballots were counted in contravention of the Representation of the People’s Act and regulations made under that law.

“Both the Supervisor and the Returning Officer for Central Leeward have each filed sworn affidavits admitting to the latter fact. The petitioner, Exeter, has filed a motion seeking inspection of the ballots, scrutiny and a recount as part of the trial process.”