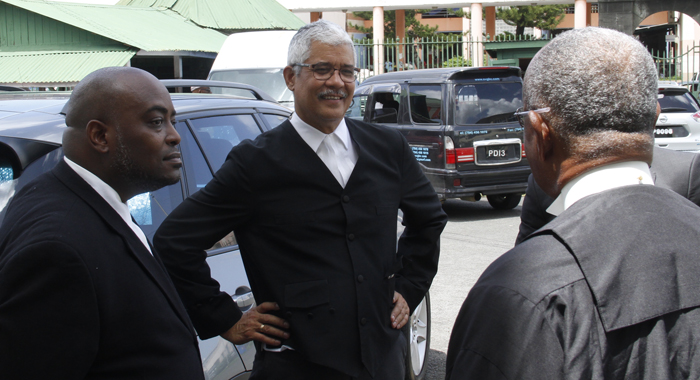 Three regional lawyers have joined the team responding to the two election petitions that the opposition New Democratic Party (NDP) has filed challenging the outcome in two districts in the December 2015 general elections.

Trinidadian Senior Counsel Douglas Mendez will replace Dominican Senior Counsel, Anthony Astaphan, who gave up the lead position after the June 30 High Court ruling that the petitions are not invalid, as the respondents claim.

The court said that the petitions could then proceed to trial.

Astaphan, speaking on radio in St. Vincent on June 30, described Mendez as “absolutely superb” and announced that he had recommended that Mendez immediately start representing Supervisor of Elections, Sylvia Findlay Scrubb.

Astaphan said he had been battling ill health since last December and has a backlog of cases in Dominica.
He maintained that he has not been fired.

The third non-national member of the legal team is Kendrickson Kentish of Antigua and Barbuda.

There was a delay in the commencement of proceeding at the High Court on Wednesday as parties waited for the three lawyers to be called to the local bar.

Vincentian Queen’s Counsel Parnell “PR” Campbell, who apologised to Justice Esco Henry for the late start, introduced the men to the local bar.

Justice Henry noted that the legal documents to call the lawyers to the bar were “hurriedly filed” and, in at least one instance, was not signed by the legal practitioner.

“I don’t know if you have seen the documents. I note they have been very hurriedly filed,” Justice Henry said.

She further noted that some of the documents submitted to the court were copies and asked if the applicants had either the originals or notarised copies at hand.

There were also issues with original copies of the lawyers’ identity documents not being submitted but all this was later done and, when the judge was satisfied that they had met the legal requirements, she admitted the three lawyers to the bar and had them seated at the bar table.

The judge said that she did not want it to appear to those who were not legally trained that she was being “unreasonably pedantic”, but noted that she was doing what the law requires.

In his comments, Campbell had noted that Caribbean Community (CARICOM) nationals still have to go through the legal formality of being called to the bar in the various jurisdictions in order to be allowed to practice there and suggested that this should be done away with.

The judge also said that this is regrettable but a legal practitioner still has to apply until such a change is made. She urged Campbell, a senior member of the legal fraternity in St. Vincent and the Grenadines, to use whatever influence he might have to try to effect the change.

Petitioner Ben Exeter, in comments to a member of the respondents’ legal team, asked whether local lawyers could not have been hired and suggested that the regional lawyer would be a drain on taxpayers in terms of their legal fees.