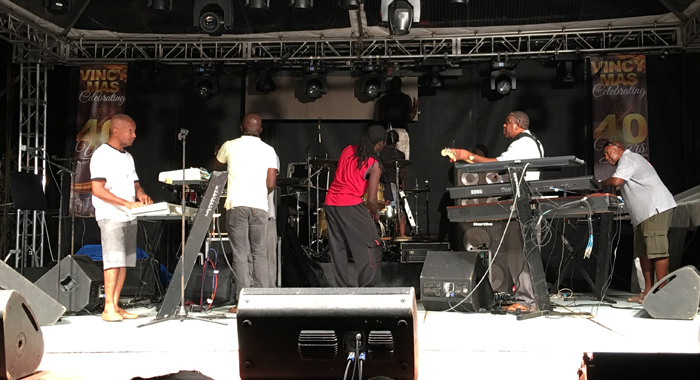 The event that was hailed as the “40th birthday party” for Vincy Mas as a summer festival had a start more akin to a poorly organised rural carnival – one of few these days — than a major national event.

Evo 4.0, which was organised by the Carnival Development Corporation (CDC), was billed to begin at 8 p.m., but never got underway until 9:14 p.m. with a prayer.

However, it would take almost two hours more before the first act appeared on stage at the event, which was held at the Cruise Ship Berth last week Friday night.

Patrons who arrived in time for what should have been an 8 p.m. start met members of the band Touch still setting up and sound testing.

One member of the band, obviously annoyed by the situation, fretted with other members of the band as he urged them to complete the sound check as quickly as possible.

“They not going to blame us,” he said, his comment picked up by a live microphone connected to the sound system at the event.

“We are not going to blame you yet,” came the light-hearted response from Ashford Wood, chief executive officer of the CDC, who was standing to the side of the stage.

iWitness News understands that Touch had arrived in time for the 5 p.m. sound check as agreed with the CDC, but the organisers of the show had to made changes to the line up, resulting in the sound check being incomplete in time for an 8 p.m. start.

We were further told that the lights for the events had arrived shortly before 8 p.m. and the big screen display was yet to be mounted when we arrived — in time for the scheduled 8 p.m. start.

At 9:19 p.m., chair of the Carnival Development Corporation’s Beauty Shows Committee, Laverne Fraser, who, along with Miss SVG 2017 Jimelle Roberts hosted parts of the show apologised for the development.

The prayer was followed by the singing of the National Anthem, led by a trio on stage. This latter item proceeded without a glitch.

Organisers of the event then played music from 9:15 p.m. until shortly after 11: p.m. when Exodus began performing.

During this time, the sound system shorted out at least once and the producer of the show, visibly displeased, attempted to get a technician to resolve the issues at the event.

The bands X-A-Dus and Touch, the only two acts to perform by the time iWitness News left the venue at 1:10 a.m. on Saturday, helped to rescue the show for the CDC, with their timeless music that had patrons partying non-stop for two hours.

The development came even as the CDC has lamented the need to have more tightly packaged shows to make their product more appealing to patrons who come to venues as well as internet and television audiences who pay for live feeds of Vincy Mas events.

The CDC decided to shelve the pageant this year — the 40th anniversary of Vincy Mas — as it tries to decide the best way forward for the event, which has become a drain on the CDC’s finances.