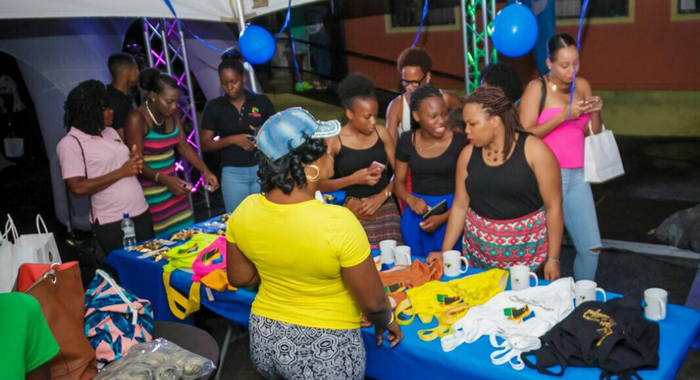 It showcased an array of glittery eye shadow in varying colours from her start-up Rachie Cosmetic Line, as well as memorabilia items such as swimsuits, canvas tote bags, mugs and hats from the “Vincentian Women Are Beautiful” collection.

Nicki Pierre of “nickkeyz beauty bar” did make-up for the event and decoration of the banner was compliments Niasha Mofford.

Patrons were treated to great styles and refreshments, snacks, great music and an amiable crowd, including men, whose support Johnson said she greatly appreciated.

Johnson was born and raised in the interior village of Penniston, St. Vincent and spent her formative years growing up under the guidance of her paternal great grandmother, Vilna George (now deceased), who she affectionately called “Ma”.

Johnson was also surrounded by an extended family that consisted of great aunts, uncles and second cousins who all referred to Johnson  as “Rachie” or “Babes”.

When Johnson was 6 months old, her father migrated to the United States, leaving her in the care of her mother and the extended family of her great grandmother.

When she migrated to the United States in 2009, Johnson was a student in Form 4 student at the Barrouallie Secondary School.

She describes her arrival in the United States as amazing, but also one of the scariest experiences of her life.

Johnson, however, welcomed the experience of discomfort that came with the changes in her environment — going from slow-paced St. Vincent and the Grenadines to the city that literally never sleeps, New York.

And “a concrete jungle where dreams are made, there’s nothing you can’t do, the streets will make you feel brand new, the lights will inspire you”, the words from a song by Jay-Z and Alicia Keys may have aptly described what New York would become for Johnson.

In Johnson’s own words: “Spending time in a new land and being so different from the natives, I had to adjust to living with many challenges. My best coping mechanism of overcoming those initial challenges was simply being myself, something my Ma use to say to me, especially when I complained after she had thrown away the bits of make-up and face cream my Aunty Donnette had given to me…

“Ma often told her grand children — ‘See-ers don’t see for themselves and hearers don’t hear for themselves. Lookers see for see-ers and listeners hear for hearers, so don’t go see something during the day and then take a flambeaux and go look for it at night. If you can’t be good be careful.’ In short, all my Ma was telling me was to be myself, my own leader and don’t get caught up following the crowd.”

Spurred on by the support and encouragement of her family, friends, members of her home community of Penniston/Vermont, her social media fans, and her passion, Johnson decided to venture into the make-up industry.

With a firm belief in the empowerment of women, Johnson estimated her best way of doing that is to lead by example.

She points out: “I knew I couldn’t keep my fashion and glam to myself, so on May 23, 2017, I launched my own cosmetic line, Rachie Cosmetics, specifically catered to the beautiful women of St Vincent and the Grenadines and the world over”.

She hopes to not only change women’s lives at home in St. Vincent and the Grenadines, but also potentially around the world.

Her foremost aspiration is to encourage women to stop hiding behind their fears, because ‘on the opposite side of fear is often our biggest success’.

Prior to the online launch of her line, Johnson also hosted an on-line Vincy Beauty Contest, titled Vincentian Women are Beautiful via Instagram.

The contest was more successful than she had envisaged. This quickly highlighted the fact that affordable fashion and make-up were not always easily accessible here at home, hence the idea to host a pop-up shop was born.

Johnson is relishing her online success with the humility and gratitude instilled in her by her great grandmother and not as a “glad-frighten showboat or nufu-cama” (as her Ma would have said).