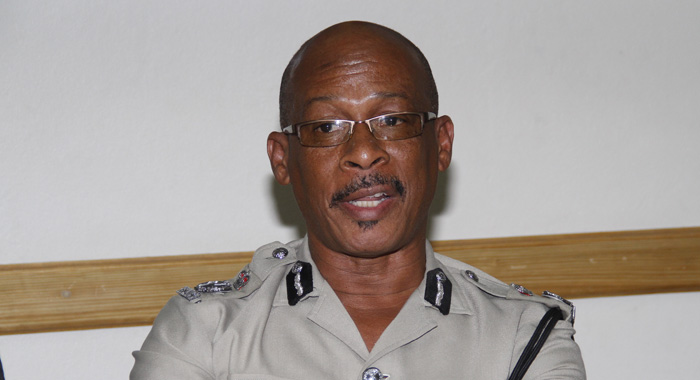 Commissioner of Police Renald Hadaway says that the Royal St. Vincent and the Grenadines Police Force is addressing the issues raised by the Police Welfare Association (PWA), which were discussed in some voice notes among members of PWA’s executive, leaked this week.

The leaked voice note has created much public debate as one of the officers suggested that they “storm” the office of the prime minister in an attempt to have their concerns addressed.

They want the police high command to respond to their request for a leave committee, to say whether police officers are insured while riding in police vehicles, and also address the need for fridges and stoves at police station.

Hadaway told iWitness News on Thursday that based on the voice notes, the PWA seems to be “up in arms and totally dissatisfied” about several issues.

He said that first among these is their concern regarding a request to see the prime minister.

“And clearly, they show their dissatisfaction with the response to that request,” Hadaway said, in an apparent reference to a claim made in the voice note that the Prime Minister has agreed to a meeting but has given no date for it to take place.

He said the response of the prime minister is “not usually”.

“That has happened and continues to happen over the years where they will meet with the team. I cannot envision why that would have created any issue for them.”

Prime Minister Ralph Gonsalves is also Minister of National Security and has ministerial responsibility for the police force.

The police chief said that according to the PWA, they requested that the leadership of the Police Force address two issues, the first of which was the implementation of a leave committee and the second being insurance for police officers while using police vehicles.

He said that when they met, the PWA brought the issues to the attention of the leadership of the police force and the police top brass requested one month to look into the issues.

He said, however, that it must be noted that carnival has just ended and the police force utilised its resources to ensure that the festival was safe.

“Carnival just finished. Why should we not try to get clarification on the issues? Because we take action into our own hands,” he said, referring to the PWA.

What is more puzzling is that the members of the PWA can attest that the police top brass has recently implemented a new leave system in two divisions, based on suggestions of police officers, Hadaway said.

“The issue is being addressed,” the top cop said, adding that new leave systems have been implemented in the Central and Calliaqua divisions, both of which came from the rank and file.

“The men sat and devised a plan to better accommodate them and that was endorsed and that is in effect as I speak.

“And that happened just about two months or so ago,” he said, adding that the plan in Calliaqua was implemented earlier.

Hadaway said that senior officers have an open-door policy.

“Anybody who is aggrieved, they turn up at my office unannounced and they say I want to see the commissioner. Long ago, persons used to have to make an application to see the commissioner… We are so open that you would meet us at any level at any location — as we leave the office, as we head to the office, wherever — and they would present their case to us. We listen.

“So I really cannot understand why such contemplation of such,” he said in reference to the “storm” the Office of the Prime Minister comment.

“The comments made are very distasteful, unprofessional, unacceptable, you just name it. One of the things that we have to understand is that, as police officers, we have a particular role to play and we cannot be speaking loosely like the ordinary man on the street. There is a certain degree of obligation that is required of us and we have to perform at the highest level irrespective of the situation that is confronting us,” he told iWitness News.