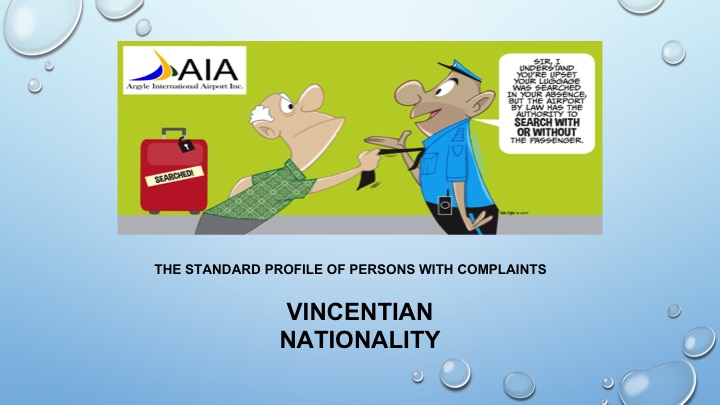 The Argyle International Airport (AIA) says that it sees “trends” relating to the complaints it receives about items allegedly missing from checked luggage, saying that the complaints come from “a particular subset”.

Hadley Bourne, chief executive officer at AIA, told the media on Monday that all security protocols are conducted and concluded for all entities and all airlines.

“And why we said trend is that we provide security services for all various carriers and why we had said trends is that those complaints and, as the data shows, came from a particular subset and I am saying that we carried out the same level of security across from all entities.”

He was asked to clarify a comment about trends that airport officials had made on a radio during a media blitz last week.

Glender Francois, manager of Customer Service and Marketing/Public Relations at AIA told the media on Monday that between May 15 and July 20, 2017, the airport, which began operating on Feb. 14, received 52 documented complaints about items missing from bags.

Of these complaints, 29 persons (55 per cent) submitted detailed flight information, including flight number, date, time, and description of luggage.

It was noted that LIAT has the greatest flight frequency out of the airport.

The most popular reason for complaints was the confiscation of “strong rum”, which accounted for 68.8 per cent of complaints.

Other complaints related to damage to bags, ransacked luggage; bottles unsealed, causing damage to articles of clothing; non-alcoholic bottles removed from bags; broadcasting of possession of firearm; refund for broken lock; contents of perfume boxes missing; lost items; and persons who felt that their bags should not have been searched in their absence.

The AIA said that “the standard profile” of persons with complaints was “Vincentian nationality”.

Airport officials told the media that investigations into 22 of these complaints have been completed, with 30 pending.

Bourne said that AIA was able to say that there is a trend based on the complaints.

“… we asked for particular information in terms of your flight, destination, etc. and the trend was basically based on the complaints and where they came from. So that’s why we said trend,” he said.

He noted that the data show that most of the complaints came from passengers travelling between Argyle and Barbados.

However, Bourne said he wouldn’t want “to go too deep into what is on-going at the moment” regarding any communications AIA might have had with Barbados about the complaints.

He, however, said, “I am one for data and statistics. And I like my empirical evidence. Some of the investigations, they are still on-going and there have been discussions in terms of certain protocols etc. I wouldn’t want to allude too much to that at the moment, but we are trying to get to the bottom of it although, at the end of the day, as you said, not to point fingers or cast blame, but we intend to look to see exactly what is happening and where it’s happening.”

Asked to clarify his comments about complaints coming from a particular subset, Bourne said:

He said the “particular subset” refers to the demographic in terms of the flight origin, destination, etc.”

Bourne said that the AIA will deal seriously with any airport worker found guilty of theft of passenger’s possessions.

“The team is well aware that any case — and they will smile because they know my views on it – any case that we found and someone is found guilty, without a shadow of a doubt, [they] would be disciplined and disciplined severely and immediately,” Bourne said.