Let them stay in the yonder cooker 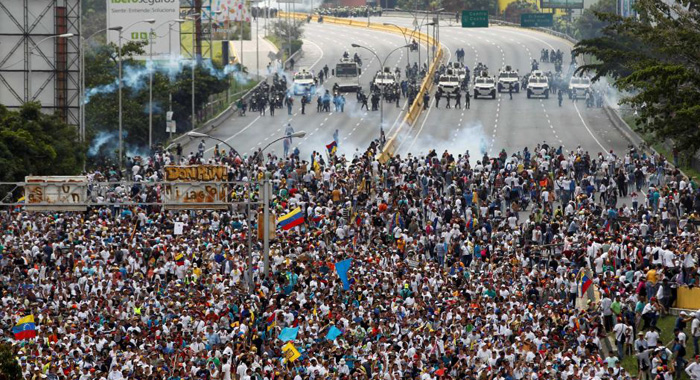 Venezuela has been rocked by large-scale protest over the last month or so. (Internet photo)

Two years ago, the Prime Minister told us that Venezuela had contributed more than a third of the cost towards the construction of the international airport. It was an expression of sincere gratitude for generous foreign aid.

But was it generosity or political grandstanding? And, as for sincerity, before arriving at that conviction we would have to ask the Prime Minister who/what he means by “Venezuela”. Is it the spectators of the country or the spectator’s government? Sincerity, or, as they say, the lack thereof, would depend on a truthful answer.

It is years late but we should be aware of the dangers of accruing political debt to a tinpot dictator who uses his spectator’s resources to prop up his standing. The inheritor in such a dalliance, a glib solicitous operator, or a thespian, say, he could make ruthless logic sound like sincere gratitude.

There are no free lunches, not from Venezuela or elsewhere and a one-third contribution to the holy grail, calls for endless lunches, when time comes. Pricey, I’d say. But, sure, not for “Venezuela.” Nor, for that matter, the people of SVG. But for the spectators of Venezuela? Ay ya yay. Death in that one.

I am not questioning the Prime Minister’s gratitude. I am damn sure he is grateful. I mean, it is 230 million smackeroos, for Pete’s sake. Wouldn’t you be, too? No, picking up on what I see as a Freudian slip, I powerful doubt his sincerity.

The slip was exceptionally illuminating. It showed him up to be politically amoral, ethically rudderless, supremely selfish and I thought the statement to be outrageously improper. Repulsive even.

The Prime Minister and his supersize ego dare not antagonise “Venezuela.” Hence, his hands-off policy towards the “situation in Venezuela”. He gave his reasons for abandoning his benefactors, the spectators of Venezuela. But the unpardonable one, the one that repulsed me, the misstep I called a Freudian slip, was that having expressed his appreciation for “Venezuela’s” substantive help, he is quite willing to surrender his hapless donors, his real, live donors, “millions” of them, to Maduro; to stew in his pressure cooker. With the 848 million bolivars safe in his “pocket” (it is a metaphor) and the airport up and running, he does “not want to see millions of Venezuelans coming to the (Caribbean) islands as” penniless “refugees.” Seriously? At best, it was a tactless and callous remark. Like: Thank you for your contribution, bountiful as it is. I have my airport. Now kindly f—k off … mis amigos. The violence, repression and bloodshed is yours. Keep it. Own it.

Where is the sincerity or dignity in that? Unless: a); his “Venezuela” is a man, Maduro, or a government personified by a man — Maduro, b); he sees help as a one-way street, c); all the above. Go figure.

The Prime Minister made that eloquently selfish and contemptible conclusion the way an unethical politician would. It slipped off his silver tongue without a sign of an internal struggle; with no recognition of the force — God forbid — of ethical obligation.

Final comment: his statement reads like the harbinger of dread: there’d be, not just desperate Venezuelans fleeing persecution (the wordsmith’s choice of word — “refugee”) but millions of them coming to invade us. The Prime Minister offered that ominous warning “from my long and collective experience, both as a politician and as the longest-lasting CARICOM Prime Minister.”

Tell us, Comrade, what is your long and collective experience of the gory tragedy in Venezuela? The only one I know is the coup and counter coup in Grenada and both lead by undemocratic tin-pot dictators.

In the first place, Comrade, why “refugees?” Why not “brave fighters?” Which is exactly what they are. Even if “brave fighters” stick in your craw, they are just that. And, by the way, why do you foresee millions of them? And if, as you creatively calculated by hedged your bets, the situation will implode peacefully, or explode violently, or, by shuffling the two cards, innumerable permutations and combinations of implode/explode, why are you sitting back playing the fiddle while Venezuela burns? Wad’s up, Bro? People day pun dying.

The solution to the “situation in Venezuela” is not in choosing sides. It is in taking a stand. The solution lies in leadership. Not who the leader is. Not what and how much he can give or how much one can extract. Just in plain, good old leadership. And that, clearly, is beyond what a bus driver can assemble.

3 replies on “Let them stay in the yonder cooker”