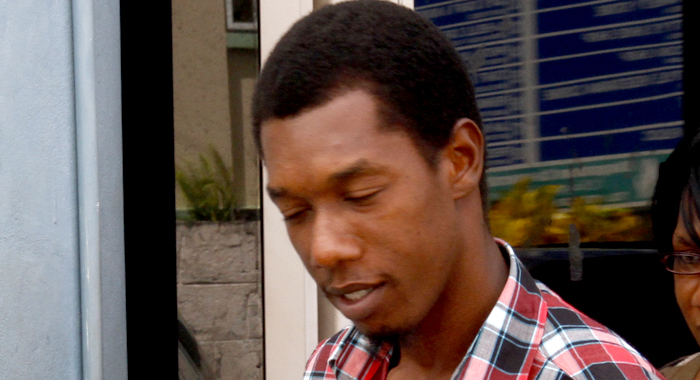 Patrick Garnes leaves the court after being reprimanded and discharged. (iWN photo)

A taxi driver who returned the favour and swore at a police officer was hauled before the court on Monday to answer an indecent language charge, even after the cop had slapped him in lock-up, the man’s lawyer says.

The taxi driver Patrick Garnes, of Glen, was charged that on July 22, 2017 in Kingstown, in a public place, he made use of indecent language to PC 21 Cummings, to wit, “Officer, this is my f***ing car.”

He pleaded guilty when he appeared before Magistrate Bertie Pompey at the Kingstown Magistrate’s Court.

The Crown’s case was that Garnes, who is in his late 20s, was driving through Kingstown when the police officer heard loud, obscene music coming out of the man’s vehicle.

The police officer stopped the vehicle and spoke to the taxi driver about it and he responded, using the obscene word.

But defence counsel, Roderick Jones, told the court that the Crown had not presented an accurate account of what transpired.

Jones told the court that it cannot be right for a police officer to use an obscene word at someone and because he has the cloak of the law on his side, charge the person for using that same word.

“To bring someone before the court mainly because of a bruised ego is an abuse of the power,” the lawyer argued

“This has to be wrong,” Jones contended.

In mitigation, he told the court that his client had entered an earlier guilty plea and has been walking the straight and narrow.

Jones said Garnes’ run-ins with the law have been restricted to minor traffic offences, all of which are misdemeanours.

The lawyer said that his client is regretful, but added that had the police officer handled the situation differently, the charge would not have resulted.

He asked the court to reprimand and discharge his client.

Pompey, in response, said he had taken into account the man’s early guilty plea and the fact that he has no criminal conviction.

He, however, said that once a vehicle is on a public road, the driver has a duty not to have indecent language emanating from it.

The retired deputy police chief further pointed out that apart from the Noise Act, a police officer has the authority to ask the driver of a vehicle to turn down loud music in a public place.

He said that persons can play indecent language in their home but at a volume where it would not be heard by members of the public.

He reprimanded and discharged the accused but told him that this should not be taken as licence to continue with such behaviour.