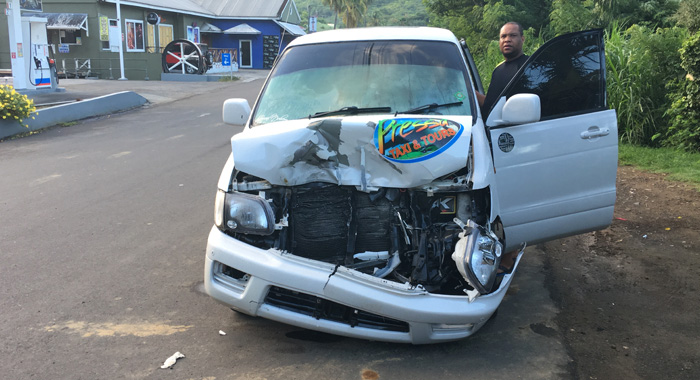 The damage done to this vehicle, HT786, after it crashed into a cattle in Cane Grove Tuesday night. (iWN photo)

The serious dangers that stray ruminants, cattle in particular, pose to motorists and pedestrians came to a head last Tuesday night in Cane Grove.

A motorist was left with a severely damaged minivan, HT786, after he crashed into a yearling heifer, killing it, along the stretch of road between Duncan’s Furniture and the service station in Cane Grove, an upscale community between Rillan Hill and Buccament Bay.

And almost 12 hours after the incident, the motorist was no closer to knowing who the owner of the dead heifer was, even as many passers-by speculated that it belongs to a farmer in the area who is notorious for disowning his animals when vehicles crash into them.

The man told iWitness News on Wednesday that when he left the scene to go and report the incident to police, someone chopped off a hindquarter of the animal.

The carcass also had signs of attempts to remove one of the front shoulders.

The young cattle was lying at the side of the road up to 7 a.m. as the driver wondered whether he should give up on trying to find the owner of the animal and claim on his insurance, which could result in him paying a higher premium for the next period.

Stray cattle is a major problem between Rillan Hill and Buccament, where the road is flanked by pastures for scores, if not hundreds, of cattle, belonging to a family that lives in the area.

The cattle are free roam animals and ever so often, herds of them make their way into the street, creating a hazard for road users, especially at night.

The area of the road where the incident occurred in Pembroke is well lit by streetlights and motorists have a tendency to accelerate along the relatively wide expanse of road.

The driver said that the cattle just emerged on the road as he was driving by.

There was no report of injury to the motorist as a result of the incident.

On Friday, police issued a bulletin, giving the owners of stray animals throughout the St. Vincent and the Grenadines two weeks to have them tied.

“The animals, mainly cows and sheep, are usually untied mainly in the areas of Argyle, Buccament, Diamond and Cane Garden and are seen walking the streets freely.

“This situation creates potential for accidents and against this backdrop, the Police is giving the owners two weeks to have the situation rectified,” police said in a statement issued through the Public Relations and Complaints Department.

“Actions will be taken within the confines of the law if the animals are not tied by the allotted time frame,” police warned.