Top seeds through to ITF U18 semis 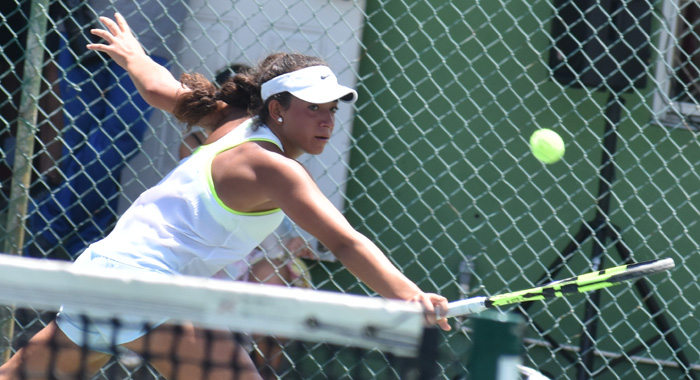 Sofia Rojas was stretched to the limit before prevailing in three sets.

Boys number one singles seed Eliot Spizzirri beat Shah Mann of India in three sets 6-4, 4-6, 6-1 to advance to the semifinals of the ITF Under 18 tournament at the National Tennis Centre at Villa on Thursday.

In the other semi-final matchup, Bahamian Donte Ambrister, who beat St. Lucia’s Jean Philippe Murray 6-4, 6-2, will play Diego Gonzalez, whose opponents, Anuj Watane, was forced to retire at the end of the first set, which he lost 1-6.

Breunich advanced to the semis with a comprehensive 6-0, 6-0, win over India’s Nairuti Vyas. Clarke posted the day’s second upset when she beat Japan’s Sena Takebe the number three seed 1-6, 6-2, 6-3.

The second semi-final clash will feature Elizabeth Reasco Gonzalez the number four seed from Ecuador and Sofia Rojas the number five seed from the United States.

The second quarter-finals though proved to be the match of the tournament to date, with Rojas providing a major upset by overcoming Remika Ohashi, the number two seed from Japan after four gruelling hours and nine minutes in temperatures at times in the mid-30s.

Semi-finals in both the Boys and Girls Doubles will also take place on today (Saturday).

The action gets going at 7:30 a.m. following the passage of Tropical Storm Harvey, which forced the rescheduling of all Friday’s matches.