Equipment at Argyle Airpport to be sold as scrap metal 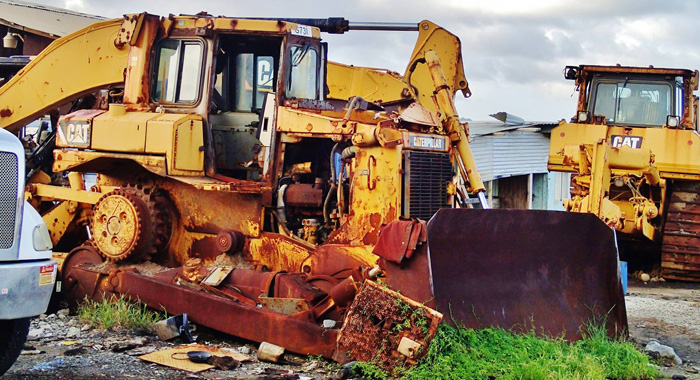 Some of the equipment used to construct Argyle International Airport.

Most of the equipment used to construct the Argyle International Airport will be sold as scrap metal, and the stone crusher could be among them.

Minister of Works Sen. Francis told a press conference on Monday that the crusher, which was brought specifically to build the airport has been dismantled.

Francis said that while other crushers have been in the country for longer, none of them have done as much work as the crusher at IADC did over a seven-year period.

“Even in a shorter space of time, the Argyle crusher has more hours operating hours than any other crusher in St. Vincent and the Grenadines,” he said, adding that most quarries operate five hours a day and close down when there is no work.

“Argyle crusher had been running from the time it was set up, most of the time, 24-7 with three shifts,” he said.

“So the crusher is dismantled, but with that usage, we have to spend a significant sum to rejuvenate that crusher. We are at the stage where I am questioning as to whether we should be investing in that old crusher or whether we should find a scrap company who would be prepared to buy that crusher off of us for scrap, use that money, along with other monies, to buy a brand new crusher.”

He told a Rods, Bridges and General Service Authority (BRAGSA) press conference that if the government is going to operate a hot mix plant and a concrete batching plant, a crusher is needed to feed them with aggregate.

Francis said that there have been challenges depending on the two private sector crushers in the country, both of which are based in the Layou valley.

He said the aggregate that had been stockpiled at Argyle is now being used up, adding that there have also been some challenges with the hot mix plant because it had been down for about three months.

He said that after the plant was restarted, they had to change a number of seals and had suffered a number of breakdowns, but the machinery seems to be working properly now.”

He said that BRAGSA recently took over a fair amount of assets of the International Airport Development Company, another state-owned firm, which was created to build the airport.

“We are taking over all the equipment of IADC and IADC should be phased out in the not too distant future,” he said, adding that in some aspect there is no sense repairing some of the equipment.

“Some are to be repaired and some are working. Those that are working, we’ve taken over, we are trying to use them.”

He noted that EC$6 million in this year’s National Budget was allocated to restore some of the equipment and said that two weeks ago, he invited persons from IADC to have persons come and assess the equipment at Argyle with a view to buying scrap metal.

“So, one or two persons have come in, they have viewed what is there, it is open to locals as well, those who are in the scrap iron business, but is it large.

“This is old bulldozer, worked out, worn out excavators, and the road reclaimers and the heavy earth moving equipment. This is what we are talking about. Those who have interest in it can go out, have a view, contact Dexter Gellizeau here at BRAGSA, and he will direct them to go and have a view and make proposals for it.”

He said that the more people making proposals, the better deal BRAGSA will get.