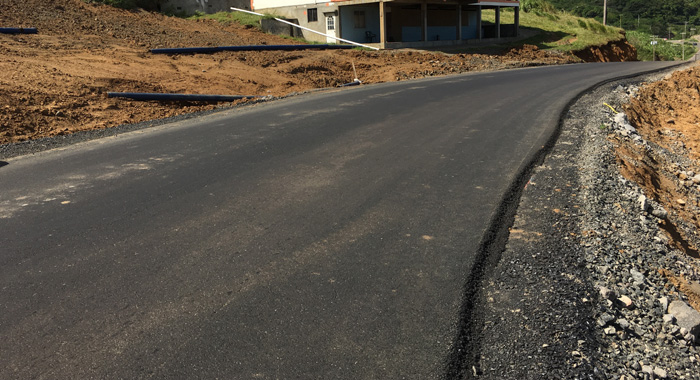 The Argyle by-pass road after its most recent repair, in December 2016. (iWN photo)

The government is, for a second consecutive year, working on the road outside the Argyle International Airport which has collapsed twice since it was constructed a decade ago.

Last year September, the road at Argyle, outside the airport collapsed because of the heavy rains, two years after it was shifted further inland because of a similar collapse.

Minister of Works, Sen. Julian Francis said that the government, last year, employed a private contractor to do the remedial works.

The private firm was advised and supervised by the Ministry of Work’s engineers.

“They never completed the work,” he said, adding that an excavator is now benching the bank side.

“That drains were never completed. That was in the works right now and BRAGSA (Bridges Road and General Service Authority) has the responsibility for that and we have a special team to handle that.”

The minister said he hopes that there will be fair weather for two weeks, but said that is not the indication from forecasters.

“… once the dirt is taken out and the drain is prepared and surveyed and get the proper level — that’s one of the problems in that area because water comes back in the centre and runs back under the drain and runs down to the airport drain. I’m taking it away from the airport drain.”

He said once the drain is excavated, the casting of concrete and erection of boxing can be done.

“So I am hoping to have that done as soon as possible under some of these monies,” he said, referring to the EC$13 million road repair programme that BRAGSA is currently executing.