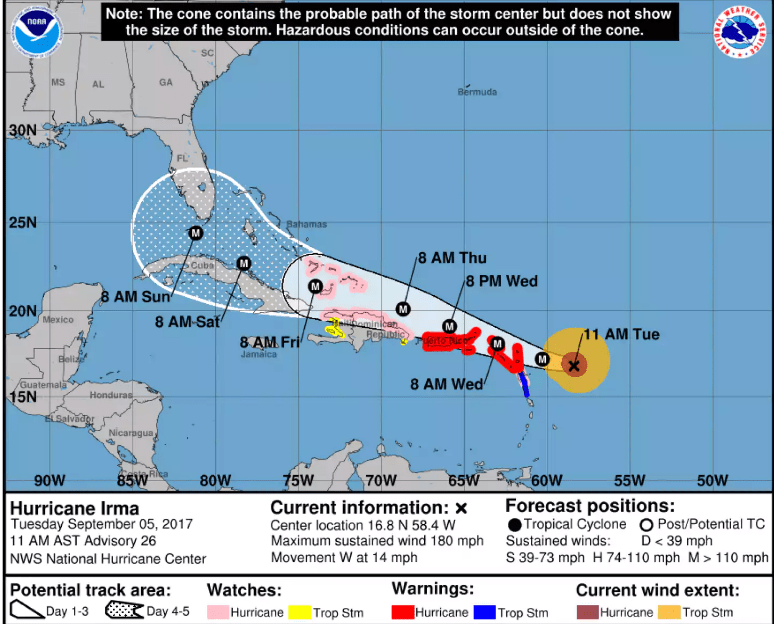 The National Emergency Management Organisation (NEMO) Tuesday afternoon urged coastal residents in St. Vincent and the Grenadines to be vigilant and prepared for possible storm surge and isolated pockets of moderate to heavy showers and thunderstorms as Hurricane Irma moves through the northern Caribbean.

Hurricane Irma is now a category five dangerous hurricane and the St. Vincent and the Grenadines Meteorological Services said that at 11 a.m. Tuesday, the storm was located near 16.8°N….58.4°W or about 230 miles east of the Leeward Islands an is moving westward at 14 mph.

Although Hurricane Irma is to the north of St. Vincent and the Grenadines, there is still a possibility of high surf, isolated pockets of moderate to heavy showers and thunderstorms, NEMO said.

The agency said that a small craft warning and high surf advisory for St. Vincent and the Grenadines remain in effect.

“Coastal residents in the Grenadine islands are also asked to exercise extreme caution,” NEMO said and urged mariners and fisher folks to take all the necessary precautions to secure boats and equipment.

Residents living in low lying areas, areas prone to land slippage and areas along river banks are also asked to be on the alert and take the necessary precautions, especially residents in the following areas who have been affected in the past: South Rivers, Colonaire, Sandy Bay, Mt. Young, Basin Hole, London, Owia, Fancy, Spring Village, Vermont, Buccament and Chateaubelair

Jose poses no immediate threat to land and is projected to move north of the Leeward Islands by Saturday — away from St. Vincent and the Grenadines.

NEMO and and SVG Meteorological Services will continue to monitor these systems.