Owners mum amidst reports of ‘explosion’ at business place 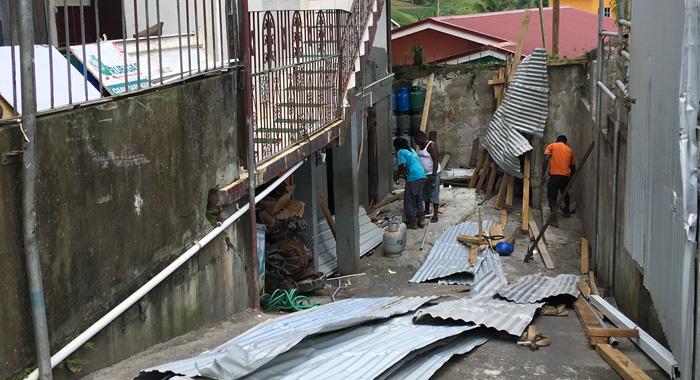 The scene of the incident in Richland Park on Monday. (iWN photo)

The owners of a business place in Richland Park have remained mum amidst reports that there was an explosion of a liquefied petroleum gas cylinder there on Monday.

The “explosion” is said to have taken place at the business place belonging to the Mounseys in Richland Park midmorning Monday.

When iWitness News visited the scene, workers were busy cleaning construction debris from where a truck had crashed into a shed, destroying it.

Most of the workers were tight-lipped about what happened and efforts to talk to them were met with calls from other staffers for them to go into the business place.

However, one worker said that the brake of a truck had failed while the vehicle was parked on an incline on the property, where they were offloading gas cylinders.

He denied that there had been an explosion as had been communicated to some law enforcement sources in Kingstown.

The employee, however, confirmed that the vehicle had destroyed the shed.

Villagers also spoke about hearing a sound akin to an explosion after the crash.

Mr. Mounsey was not at the business place and his workers told iWitness News to come back another time.

On Thursday, Mrs. Mounsey, contacted via telephone, again directed iWitness News to her husband, saying he, too, was not at business place when the incident occurred, but would be the one to make any comment.

She promised to seek his permission to give his contact details to iWitness News but never got back in touch with us.