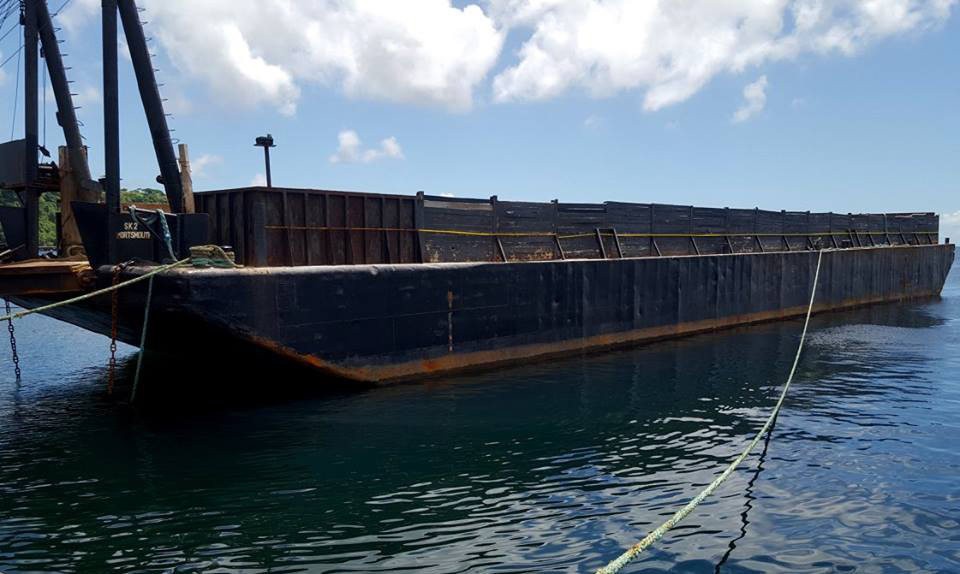 Rough seas and other unfavorable marine conditions on the weekend forced the return to Kingstown of an 1,800-tonne barge laden with relief supplies bound for storm-ravaged British Virgin Islands (BVI).

The supplies were donated by the government of St. Vincent and the Grenadines, businesses and individuals and had been dispatched to the British overseas territory, which is at risk of being hit by another hurricane, even as it struggles to respond to the devastating blow dealt by category 5 Hurricane Irma on Sept. 6.

The government had spent over EC$400,000 to help in the effort, with the barge carrying corporate and individual donations for persons in the BVI, where 10 per cent of the 30,000 residents are Vincentians.

The contribution of the government included some 2,500 gallons of fuel for the vessel.

He said that the donations from SVG was able to fill 80 per cent of the barge, which set sail from Port Kingstown around midnight Friday, and was scheduled to arrive in Tortola 48 hours later.

Gonsalves, who has ministerial responsibilities for disaster management, said that when he returned to Kingstown from Venezuela around midday Sunday, the National Emergency Management Organisation (NEMO) in Kingstown told him that the barge was on the western side of Dominica.

He asked NEMO to ask the captain if they could go south to St. Lucia because of the predicted path of the storm.

“But I think that even on the western side there’d be problems, so they clearly took a decision to come further south, so they are here. They are out here, they have come back into our waters,” he said of the vessel, which is docked in Port Kingstown.

“This is just a fact of life. We have to wait until Maria passes in order to be able to send the food and water,” Gonsalves said. “It is a sad thing that they are delayed.”

He noted that the region has been dealt a heavy blow by tropical cyclone this Atlantic Hurricane Season, which ends, officially, on Nov. 30.

“The season is still active. We hope and pray that we would be spared but we don’t know what will happen. We just have to be prepared and we have to be active in that preparation,” Gonsalves said.

He told the media that the relevant state agencies are working in a coordinated fashion and he and the director of NEMO, Michelle Forbes, are in contact with each other all the time.

“And I am keeping colleagues informed and I am having reports. I have a file here with reports of one kind or another with this matter. It’s taking up a fair amount of time on a daily basis and on a nightly basis too for us to get things together,” the prime minister said.

One reply on “Storm forces barge of hurricane relief supplies to return to St. Vincent”