The psychological impact of Hurricane Irma 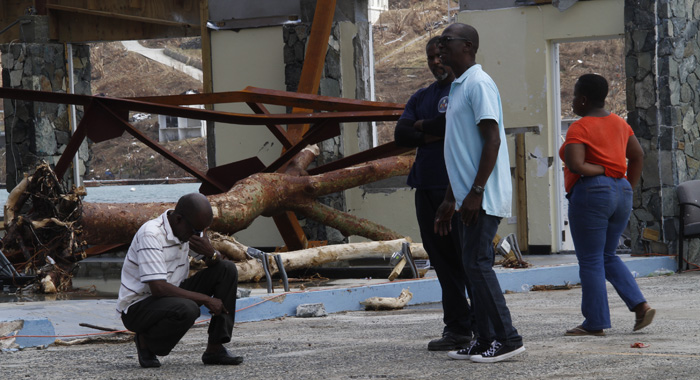 ROAD TOWN, British Virgin Islands (CMC) — Outside the Road Town Ferry Terminal where several passengers wait to board the ferry to Virgin Gorda, a loud slew of characteristically Caribbean expletives instantly mutes all other conversations.

They come from a man whose shabby dress suggests that he lives on the fringes of society.

The 22-year-old woman to whom the swear words are directed responds in kind, unaware that the man is well known to have a history of mental illness.

The unidentified woman is further enraged as an older man scolds her for her response, while seemingly ignoring the provocation. She grabs a broom and has to be strained as she threatens violence against the man who started the melee and the older gentleman that intervened.

The development comes as people wait for an opportunity to travel to Virgin Gorda to check on their loved ones amidst a telecommunication blackout as a result of the monster storm, Hurricane Irma, that swept through the Territory on Sept. 7, leaving at least four dead, destroyed or severely damaged 60 to 80 per cent of buildings and knocked out the electricity distribution network.

The woman, who does not want her name mentioned, later tells the Caribbean Media Corporation (CMC) that the hurricane destroyed both of her houses. She has not heard from her fiancé and other relatives in Virgin Gorda for a week and is hoping to take the ferry to check up on them.

The woman maintains that her aggression has nothing to do with the pressures brought on by Hurricane Irma, although in the same conversation, she speaks about her fellow citizens being too violent and self-centred and the storm being a wakeup call.

A few minutes later, she exits the queue boarding the ferry and burst into tears. “This is too much for me,” she tells CMC.

The woman’s aggression and subsequent crying illustrates the psychosocial damage, an often-overlooked impact of natural disasters and other catastrophic events on Caribbean nationals.

“Specifically as it relates to Hurricane Irma, one of the things we have to realise is that this hurricane was a catastrophic event, and catastrophic from the perspective that there’s a significant amount of losses that persons experienced and it’s losses of life as they know it, losses related to personal property, losses related to changes in what we see around us,” says psychiatrist, Dr. June Samuel.

She tells CMC that the impact of the hurricane “has a broad scope,” explaining that in the face of the losses that resulted from Hurricane Irma, persons have new stresses related to meeting their basis needs of food, clothing and shelter.

“And once you have human beings essentially in survival mode trying to meet their basic needs, they will start to have responses which are similar to your fight and flight response.”

Dr. Samuel notes that during the first two weeks after a catastrophic event like Irma, persons have acute stress response, manifested in difficulty sleeping, a lot of anxiety, panic episodes, and having general anxiety symptoms.

She warns if this continues past the first two weeks, there can be situations where persons get into a post-traumatic stress response, adding that the response would vary, deepening on the individual’s, level of resilience and coping skills.

“… so if persons have come here primarily to work or come to any island primarily to work and they don’t have that extended family support, they are going to be more at risk for experiencing these responses,” Dr. Samuel noted, a worrying reality for the BVI, where 60 per cent of the population are expatriates.

Dr. Samuels says anger, aggression, and irritability are part of the response that can be expected from persons immediately after a traumatic experience such as Irma, which one 69-year-old resident told CMC was the worst hurricane he has experienced in the territory.

“And that is why it is so important that in handling the whole recovery response, we ensure that people are reassured and that there is evidence of order, that these needs — basic needs — will be met while we go through the rest of the recovery.”

Mental health professionals encourage people who have experienced such a high level of loss to seek help to deal with the trauma of their experiences.

“Being in the hurricane itself and having personally experienced it, it was a traumatic event because for most people who were in the hurricane, at some point, you felt as if you could have died,” Dr. Samuel says, adding that it is important that persons get counselling and have places and spaces in which they can talk about their experiences.

“They should also get help in managing the emotions they may be feeling because people are going to be feeling overwhelmed. Therefore, persons should be allowed to talk about what they are feeling, cry if they need to cry.”

Dr. Samuel notes that in the Caribbean, people are sometimes reluctant to go for counselling, but points out that receiving counselling might not be a priority for storm victims who are trying to survive and meet their basic needs.

“So we need to make sure that we set up in our response ways that people have access to or counselling is made available to persons,” she says, adding that counselling can be provided in disaster shelters and work places and for students when they return to school.

But she says that mental well-bring is also linked to physical well-being, and that persons should ensure that they get adequate rest and eat properly and regularly, even as she notes that stress could reduce one’s appetite.

However, even persons who suffered no physical injured or whose properties suffered negligible damage in the storm have felt overwhelmed by their experiences.

They included a woman who tells CMC that while the only impact on her house was some flooding, she was feeling stressed out by her experience during the hurricane.

“But I was able to have a counselling session with [a doctor], along with two other persons and it really helped me in terms of looking at it differently, basically accepting what is and trying to put a positive spin on it going forward. So, after leaving the meeting, I felt more relaxed,” said the woman, who asked not to be named because of her job does not allow her to speak to the media.

In the aftermath of Hurricane Irma, virtually everyone who spoke about his or her experience at some point said, “Thank God I am alive.”

Gregory Smith, a Trinidad-born pastor who has been shepherding the congregation at Emmanuel Baptist Church in Virgin Gorda for the past eight years, said that islanders are still in shock after experiencing the hurricane.

“A lot of people are saying this is unreal, this is not happening. They are still in shock as to what exactly happened,” he says, adding that in the weeks to come, the reality will come home to many residents, some of whom moved to the BVI as many as 30 years ago.

“They have lost all their possessions; some of them have built homes here, they have lost their homes, there are no jobs so all of these things are going to have to be considered as we move forward,” says Smith, who has been living in the BVI for 19 years.

Smith tells CMC that religion is playing a role in helping people to cope.

The pastor’s comments have been borne out by Sharleen S. DaBrea, the director of the Department of Disaster Management, who notes that some members of her staff were beginning to buckle under the emotional strain of seeing their work place destroyed and having to respond to the disaster from a temporary location.

“I’m having some challenges now with them because many of them are actually breaking down,” she said, adding that the physical demands of the response effort is also a contributing factor.

“We have some younger ones, I believe the hydration issues are now affecting, a lot of intense work, a lot of monitoring things, I think they are not taking care of themselves as they should, so we are now looking at a full care programme for the DDM,” DaBrea tells CMC.

But for Pastor Smith, islanders’ “Thank God I am alive” is code language for the extent of their losses.

“But I’ve been encouraging everybody,” said the pastor, who has three children, ages ranging from 4 to 13.

He says he is especially concerned about the well-being of children who experienced the hurricane, telling CMC that he does not think that the reality has sunk in as yet.

“… my big daughter, she just sits. So those are the things we are going to have to consider moving forward,” Smith said.

One reply on “The psychological impact of Hurricane Irma”