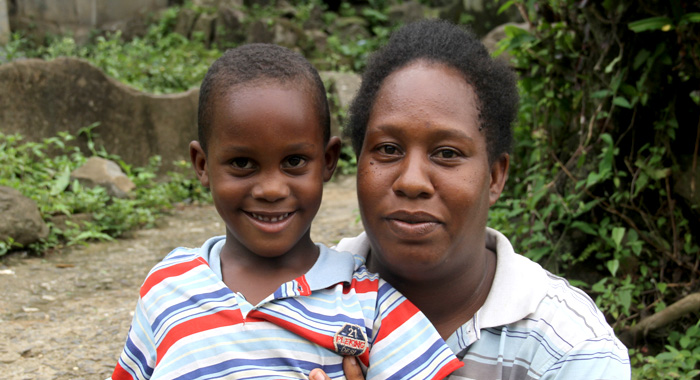 A 5-year-old boy with autism has been denied continued education at the Layou Government School where he had been enrolled for a year, at the end of which he was promoted from Kindergarten to Grade 1.

To make matters worse, the School for Children with Special Needs has concluded that the student, Lancelot Junior Douglas of Layou, is high-functioning and should continue his education at a primary school for neuro-typical children, his mother, Tamesha Cupid, of Layou, has told iWitness News.

Autism Speaks, a website, says that autism, or autism spectrum disorder, refers to a range of conditions characterised by challenges with social skills, repetitive behaviours, speech and nonverbal communication, as well as by unique strengths and differences.

The term “spectrum” reflects the wide variation in challenges and strengths possessed by each person with autism.

Cupid told iWitness News on Tuesday that her son was sent home after an incident on Sept. 5.

The Grade 1 student’s teacher was reportedly injured when she was struck in the face by a toy car that flew out of Lancelot’s hand as he was struggling to free himself from the teacher.

Cupid said she was in the kindergarten classroom when the incident occurred and told iWitness News that she was angry, because she taught that her son had struck the teacher.

She, however, said that another teacher told her that Lancelot had not pelted the toy at the teacher but had struck her accidentally.

“The principal called me and say that he can’t deal with Lance and must take home Lance until he decide what to do with Lance,” Cupid said.

The mother said that when Lancelot does not have any schoolwork to do, he would get active and go outside the classroom and play then come back into the class.

“The teacher know about that problem,” Cupid told iWitness News, adding that she found out about her son’s autism when he was about to turn 3, when his father decided to take him to see a doctor because he was not speaking properly.

Lancelot attended the Layou Methodist Preschool, which has a general curriculum, not specially designed for children with autism.

“His teacher told me she had no problem at all when he was going pre-school. But as he entered primary school, that is where all the problems began,” Cupid said.

She said that a student had complained about Lancelot writing on his books and backpack.

Lancelot told her that he did not do it on purpose and she explained to him that he should not write on other people’s school supplies because they would be displeased and he would not want anyone to do that to him.

“He told his friend sorry,” the mother told iWitness News.

She said her son would also run and tap older students so that they can chase him. “Sometimes, if he sees you don’t follow him, he could come back and hit you again to play,” she said.

Cupid said that on Sept. 6, the day after the incident in which the teacher was struck, she went to the Ministry of Education, where officials told her that she would have to enrol Lancelot at the School for Children with Special Needs.

She said she went to the school the following week and showed them the work her son had done in kindergarten.

The School for Children with Special Needs concluded that Lancelot had no special education need that would require his enrolment at the educational institution.

The teacher further advised that the child be returned to a primary school for neuro-typical children and be given something to occupy his attention after he has completed his work so he would not constantly go outside to play.

“And he did pass kindergarten very well to go to Grade 1,” said the mother who showed iWitness News samples of the work her son did during his year in primary school.

“I carried him back [to the School for Children with Special Needs] and the lady told me he does not need to attend that school because he is high-functioning. If he wasn’t high-functioning, they would have accepted him there,” the mother said.

“The lady told me that there is for slow learners, children who don’t know that much. But he knows. He knows when he does something wrong, he knows when he does something right. I normally send him to the shop, I send him Bible Club, I send him to town with his sisters by his grandmother; I send him practically everywhere because right now, he is showing, ‘Mommy, you can trust me,’ because first time, I never used to send him anywhere because he used to play a lot,” Cupid told iWitness News.

“I want him to go to regular school because I know he can make it in regular school. If they even allow me in any school for him to go, I will be very grateful because I know he can learn. You ask him any question, you give him a book, you tell him plus sign means to count all and he would do everything. So, if I can just get him in a school, I will be grateful and I will say thanks,” the mother said.

On Wednesday, acting Chief Education Officer, Beverly Neptune, told iWitness News that she would prefer not to comment on the matter at this time, as she was still verifying information about the case.

However, Neptune, whose background is in special education, told iWitness News that Lancelot was not “expelled” from the Layou Government School.