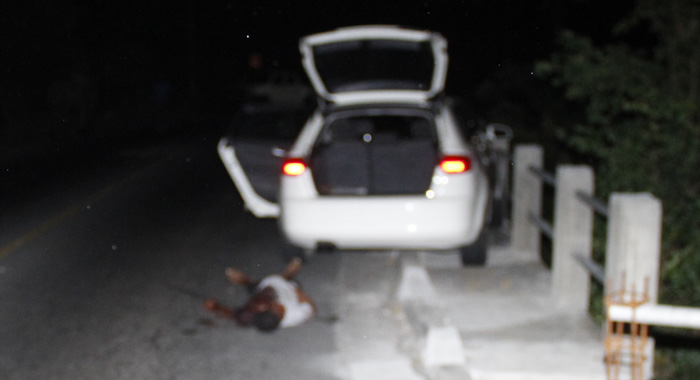 A would-be robbery ended badly for the attempted robbers around 11 p.m. Friday in Casson Hill.

A man whose car was hijacked shot one of the hijackers dead, reportedly with their gun, and is believed to have injured the other, who fled the scene.

iWitness News has been able to piece together some of the details surrounding the incident, which began in Richmond Hill, Kingstown and ended with a robber being shot dead and the owner of the car left with an injury to the head.

Our information is that Dale Lyttle, 31, of Paul Over, had stopped his car, P3828, a white Audi, in Richmond Hill and was using the internet when two men, armed with a gun, approached him and forced him to sit in the back of the vehicle.

One of the men took over the driver’s seat, while the other, who was armed with a handgun, sat with Lyttle in the back of the vehicle.

On reaching the Casson Hill area, Lyttle was able to overpower his attackers — who had earlier struck him in the head with the gun.

He shot one of them in the chest, killing him on the spot — with the man dying inside the vehicle.

iWitness News understands that Lyttle was also able to discharge two other shots, one of which pierce the driver’s seat of the vehicle, leading police to believe that he might have also injured the other assailant.

On Saturday, police, responding to a report that the body of a male in the Casson Hill area, found an injured man and took him to hospital.

However, iWitness News has so far been unable to ascertain whether the man found on Saturday had gunshot injuries or if he is believed to have been the other assailant in the robbery.

Police have so far been unable to establish the identity of the man who was shot and killed as a result of the robbery and are asking for the assistance of the public in doing so.

Meanwhile, police are also investigating the death of Vermont resident Raphael O’Neil who was shot and killed by unknown assailants at a shop around 10:40 p.m.

The 31-year-old man, who is also known as “Snaky”, was recently released from prison and has a history of burglaries.