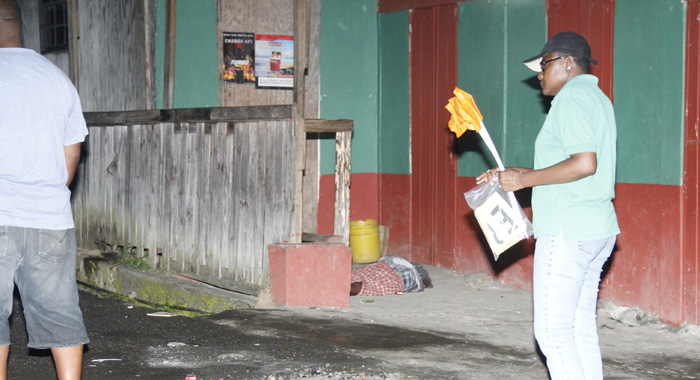 Police are investigating the shooting deaths of two males in separate incident in St. Vincent and the Grenadines Friday night.

They have identified the victim in the shooting incident in the South Leeward community of Vermont, but are seeking the assistance of the public in identifying a man who was shot and killed in Casson Hill, in East Kingstown.

Vermont resident, Raphael O’Neil was shot and killed by unknown assailants at a shop around 10:40 p.m.

The circumstances surrounding the death of the man, who is also known as “Snaky” and was recently released from prison, are not clear.

In March 2016, police had issued a wanted bulletin for O’Neil — who has the words “Death Row” tattooed on his right hand.

He was at the time wanted in connection with a series of burglaries.

Meanwhile, police are said to be pursuing a theory that a man who was shot and killed along the Casson Hill Public Road around 11 p.m. might have died as a result of a robbery.

They were yet to identify the man at the time of publication of this story, but he is believed to have been an occupant of a white Audi, registration number P3828.

The man’s body was found lying outside and to the rear of the vehicle on the right hand side of the road, when travelling out of Kingstown.

The position of the vehicle – on the wrong side of the road when travelling in that direction, and the fact that it had mounted the curb — suggested that it might have crashed there.

Is it believed that there was at least one other occupant of the vehicle, who police are also trying to locate.

Friday’s killings bring to 27 the homicide count in St. Vincent and the Grenadines for 2017.

5 replies on “Two men shot and killed in St. Vincent”