Those being killed ‘are not innocent persons’ — Francis 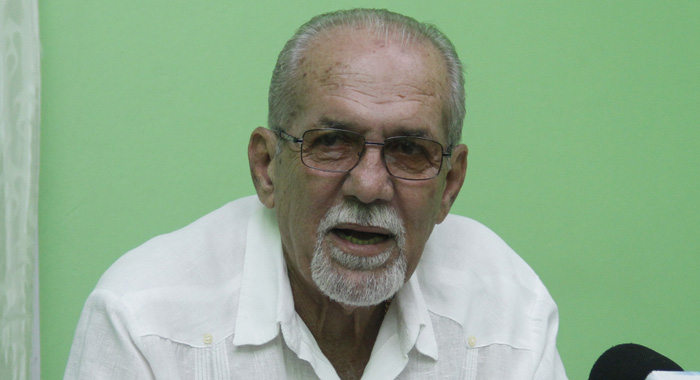 Notwithstanding the spate of killings in St. Vincent and the Grenadines, the nation’s residents can go about their business as usual unless they are involved in criminal activities — or fear being hit by a stray bullet.

This was the suggestion by Minister of Local Government, Sen. Julian Francis on Tuesday at the end of a day when one man was killed and two other persons injured during a shooting incident outside the crowded Leeward Bus Terminal in Kingstown.

Tuesday’s shooting was in addition to one in Vermont and another in Casson Hill Friday night, each of which claimed one life.

The spate of killings has left many residents of SVG unnerved.

But, on his weekly radio programme, Francis offered this as reassurance:

“… one of the things we have to see in this and say in this is that persons who are being shot and killed in this are not innocent persons. They are involved in one way or the other.

“There haven’t been a lot of [innocent] shootings and killings. There have been one or so in between,” he said, mentioning among the innocent dead national footballer is Roy “Chicken” Richards, 34, and elderly shopkeeper Daniel “Bogan” Hepburn, 78, who were shot and killed in Barrouallie during a robbery on the night of July 8 — the same night when Kemmie Haynes, 34, was shot and killed in Green Hill.

Among other innocent victims of crime that the minister referred to was Dale Lyttle, who escaped from his abductors who had hijacked his car in Kingstown. Lyttle was able to wrestle a gun from Andrew Roberts, one of the two hijackers, and shot him in the chest, killing him in Casson Hill last Friday night.

“And there have been one or two instances of gun-related robberies and so on,” Francis said.

“But the killings we are talking about here, normal Vincentians going about their normal lives are not fearful of this from the point of view that they would get shot. They may get shot from a stray bullet but the shooting is not intended for innocent persons. They shootings that are going on today are intended for persons of a certain clique, whether it’s gang or otherwise.”

Francis said there are not many instances of women being shot, adding that many men are being shot and shooting each other.

“Those that get shot most of the times or get damaged or killed are domestic violence,” he said in relation to women — three days after Melville was shot and killed execution-style while walking home in Murray’s Village around 9 p.m. Saturday.

“But this warfare that is taking place — and we have to check and see where all this type of behaviour is coming from. Is it cultural penetration? Is it the television, the programming that is on television, the movies that we show? The access to the underworld through social media and television? Is it the dance hall music? Are the lyrics in dancehall music what we should be listening to? Are they playing a part in all of this?” Francis said.

He said the lyrics of a number of dance hall songs advocate the use of violence to settle scores and asked persons to consider whether this was a contributing factor to violence.

Francis’ Unity Labour Party administration is coming under increasing pressure to address crime and violence in SVG, with some persons noting that while in opposition the ULP had placed the nation’s crime problem squarely at the feet of then Prime Minister, James Mitchell, and police chief Randolph Toussaint.

Counting the dead and injured in SVG’s bloody September

3 replies on “Those being killed ‘are not innocent persons’ — Francis”