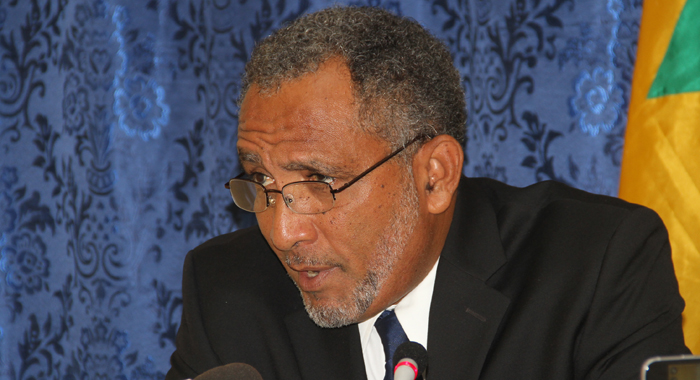 Leader of the Opposition, Godwin Friday, speaks at the press conference on Wednesday. (iWN photo)

Leader of the Opposition Godwin Friday says that the New Democratic Party (NDP), under his leadership, stands by the One-China Policy announced by his predecessor, Arnhim Eustace, in August 2016.

Eustace, who quit as NDP President and Opposition Leader in November, shocked the nation when he announced that his party no longer supports as an independent nation, Taiwan, which China considers a renegade province.

With the announcement came the severing of one of the last common policies between the NDP and the Unity Labour Party (ULP) administration, led by Prime Minister Ralph Gonsalves.

But Friday told iWitness News that the NDP still maintains its support for the One-China policy.

“The policy remains the same. We are in opposition so we have stated our support and our commitment to the One-China Policy. That hasn’t changed. We are not in government so we can only maintain that position in opposition,” Friday told iWitness News.

“As you know, we stated that position back in August last year at a press conference here and that remains the position of our party and we will continue to pursue that in government, when we will have the means to do something about it.”

Asked if the opposition has made formal contacts with Beijing, Friday said: “We have communicated our position and we are looking forward to the day when we become the government and we can adopt that policy formally as our policy in the country and to work with the government there in the People’s Republic of China to our mutual benefit and the benefit of St. Vincent and the Grenadines.”

Taiwan has formal diplomatic relations with 20 countries, six of which are in the Caribbean, three of them belonging to the Organisation of Eastern Caribbean States (OECS), of which SVG is a member.

He noted where most OECS countries stand regarding relations with Beijing or Taipei.

“As you know, other countries in the OECS and the region have adopted that policy. It is the predominant policy worldwide and it is one that really is our party coming into line with that international consensus, broad consensus and the step, of course, is to make the country follow in that lead as well.”

The opposition leader, however, said that he would not be travelling to Beijing soon, as sources have told iWitness News.

“I don’t know where you get your information from. If you have information of that sort, maybe you should send the ticket. No, I don’t have that information.”

He, however, did not deny or confirm that he has been invited to visit China.

“Well, I am not going to discuss matters relating to our policy and the discussions that the party is having whether with any particular party that are not public matters.

SVG established diplomatic relations with Taiwan in 1981 and has maintained those ties since then.

Gonsalves has said that his ULP remains committed to maintaining ties with Taipei as opposed to Beijing.