A man in a community in the northeastern corridor of St. Vincent contacted a woman via Facebook after allegedly raping her Grade 6 daughter.

A Grade 6 student in St. Vincent and the Grenadines is generally 10 to 12 years old and the alleged rapist is said to be in his late 20s.

The alleged rapist, who is said to work in the entertainment industry, reportedly raped the girl at her father’s house recently.

The girl lives with her mother but was at her grandmother’s house on a day that they happened to be going to a funeral.

iWitness News understands that the girl’s father lives near to her grandmother and the girl knows where he keeps a key so she went there to get clothes to go the funeral.

While inside her father’s house, the man is said to have accosted and raped the child.

The girl’s mother spoke of the incident in voice notes that have been obtained by iWitness News.

In the recordings, she said the alleged rapist has been on the run since the incident.

The mother, however, said that the man should pray that the police get to him before she does.

“I think he should go give up heself because me nah tell yo’ no lie. I go chop he up dead,” she said, speaking in the Vincentian vernacular. 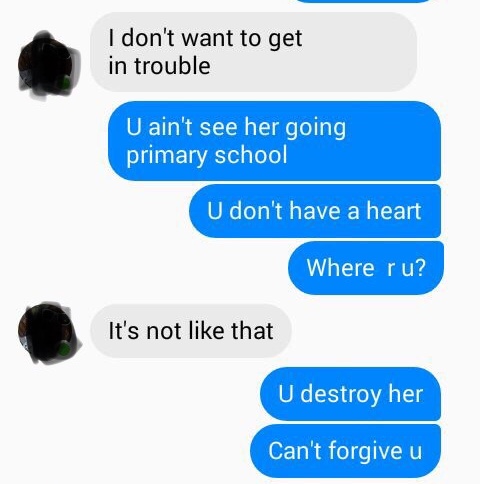 The woman said that the man spoke to her about the incident via Facebook messages after she accepted a message request from the man, who is not in her network.

The mother said that when she accepted the message, she called her daughter and asked her if she knows the man.

The girl told her mother that the man in the Facebook messages is the same man who had sexually assaulted her.

In the conversation, some of which iWitness News has seen, the man asked the woman, “What’s going to happen”, and also told her, “I don’t want to get in trouble”.

The woman noted that her daughter is still in primary school and told the man that he doesn’t have a heart.

She further asked him where he was at the time of the Facebook conversation.

The woman then told the man that he has destroyed her daughter and she can’t forgive him.

In the voice notes, woman said that she had invited the man to meet, adding that the invitation was a ploy.

She said she had planned to take along a cutlass, which she had sharpened “back and belly”.

“I wudda chopped him up into pieces,” the woman admitted.

She said the man rejected the offer to meet, saying he would prefer to speak to her on WhatsApp because he doesn’t want to go to jail.

The woman, however, said that the man will go to jail since she is not settling the matter out of court “because he destroyed my daughter”.

In the voice notes, the woman further said that she went to the man’s yard with a sharp cutlass looking for him, but his relatives said he was not at home and hardly comes around since the incident.

“Yo’ see how he ah run from police all about? Me wah he meet up pon me one ah these days. From since the thing happen, me ah walk with me cutlass in me bag sharpen back and belly.

“I will chop him up like meat and I would sit down when I’m done and call police telling them I just chop him up dey. Seriously,” the woman said.

She said the man is so silly that he responded to her request to message her on WhatsApp.

“Ah cyah wait to go court,” she said, noting that she has all messages from the WhatsApp conversation — a suggestion that they will form part of the evidence against the man.

4 replies on “Man messages mom after raping her daughter”