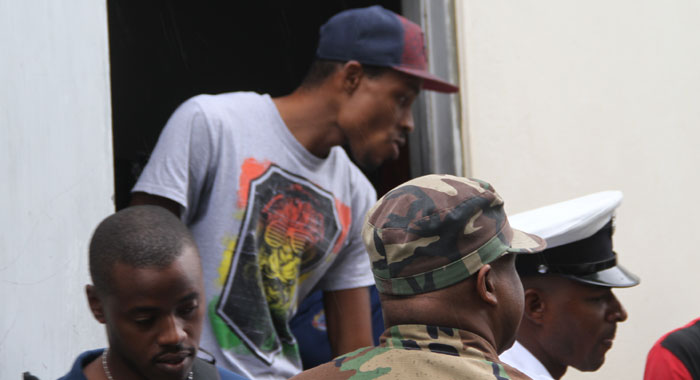 Two more men were on Monday charged in connection with the Oct. 15 shooting of Paul Avenue resident, Jawansa “Sanga” Fraser.

The charges against Colin “Cocoa” David, of Glen, orginally of Long Wall, and Ricardo “Shrek” McFee bring to three the number of persons who have been charged in connection with the crime.

The duo was brought before Chief Magistrate Rechanne Browne-Matthias the Serious Offences Court in Kingstown, charged with the attempted murder of Fraser.

They were each further charged that on Oct. 15 at Paul’s Avenue, they used a firearm with intent to commit the offence of murder on Fraser.

Further, the men were each charged that on the same date, at Paul’s Avenue, with intent to commit the offence of murder on Fraser, they each did an act which was more than merely preparatory to the commission of the offence.

They were not required to plead to the indictable charges.

They join Jomarno “Small Man” Tash, of Rockies, who was slapped with similar charges on Thursday.

However, unlike Tash, who secured bail when he was arraigned last Thursday, Browne-Matthias denied the men bail.

Senior Prosecutor Adolphus Delplesche, also, unlike in the case of Tash, objected to bail for David and McFee.

Delplesche noted that this is the third firearm charge that David has before the court.

He, however, said that the latest charges “are a bit higher than the ordinary”.

David was granted bail last Thursday in connection with firearm and ammunition charges.

He secured bail although he was already on bail for a similar offence, allegedly committed in May.

In objecting to bail in connection with the latest charges against, Delplesche noted the presumption of innocence on the part of the accused, but said this is only a legal presumption.

He said that this presumption must be balanced with the nature of the offences and the climate in the court.

“Serious times,” Delplesche said, adding that the firearm allegedly used in the commission of the offence is yet to be recovered.

In the case of McFee, Delplesche noted that all the charges against the accused man are firearm-related.

He said that while the law allows for the presumption of innocence, it also allows the prosecution to object to bail.

Delplesche asked that McFee be remanded into custody while the investigators continue “to prowl” for the firearm allegedly used in that and other offences “in our blessed, loved land”.

Lawyer Grant Connell, who represented David, cited the law and noted that only in cases of murder, genocide, treason, and high treason is bail not opened to accused persons.

He said that a person who is accused of committing another offence while on bail can have their bail rescinded or modified.

Connell argued that his client is a virgin to the law, as far as a criminal conviction is concerned.

He noted that David was granted bail last Thursday, Oct. 19, for an offence he allegedly committed on Oct. 18.

He further pointed out that the offences against Fraser were allegedly committed on Oct. 15.

Connell told the court that it, therefore, cannot be argued that David allegedly committed the offence while on bail in connection for the second gun charge.

The defence counsel further noted that when Tash appeared in court last week, the prosecution did not object to bail and he was granted EC$30,000 bail with one surety.

Connell argued that the prosecution’s claim about investigators trying to retrieve the firearm used to shoot Fraser is “a fishing expedition, in light of the resources of the police.

“It is like looking for a needle in a haystack,” the lawyer argued.

He told Browne-Matthias that if she grants bail, she would be acting within the law, adding that a decision to the contrary would be lopsided.

But Delplesche, in response, told the court that the section of law quoted by Connell also says that bail is at the discretion of the court.

Meanwhile, McFee, who was not represented by counsel, asked the court to grant him bail, noting that Tash had already secured bail in connection with the same charges.

However, the chief magistrate said she couldn’t discount what is happening in the country at the moment and the nature of the offences.

She denied the men bail, adding that she would review her decision on Nov. 3, 2017.