‘I was not seeking to rob anybody’ — lawyer Israel Bruce 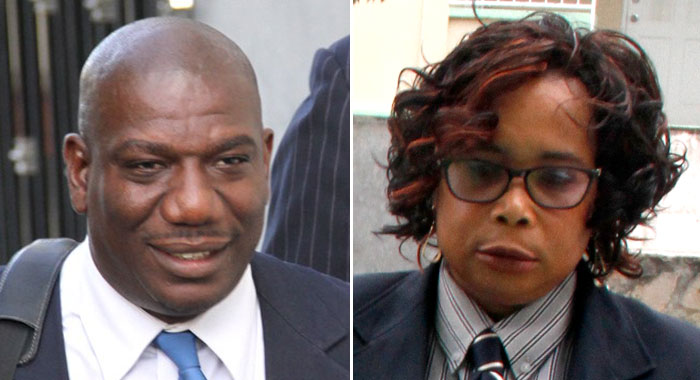 The lawyer and politician at the heart of a 2015 court judgement that last week became fodder for partisan and social media commentary, says that he had made a fundamental mistake as a young legal practitioner.

Israel Bruce said that the central element of the judgement was that he had not entered into a sign agreement with the parties on whose behalf he had acted.

Bruce, who more than a year after the judgement became the main opposition New Democratic Party’s (NDP) candidate for South Central Windward, told iWitness News Sunday evening that he believes that the case is now being used for purely partisan purposes.

But he noted that when the events that led to the lawsuit occurred, he was practising law for less than a year and was enthused about getting a job.

“I was not seeking to rob anybody,” he told iWitness News.

He further said that the case is now being used by the ruling Unity Labour Party (ULP), who he accused of trying to paint him as a dishonest person in light of what he said are the inroads he is making in South Central Windward, where he is carded to run against the ULP’s Saboto Caesar in the next general elections.

“I am satisfied in my mind that the response to my candidacy in South Central Windward is responsible for this nasty campaign,” Bruce told iWitness News.

“This is all part of the ULP’s hatchet job,” Bruce said.

In a July 13, 2015 judgement, Eastern Caribbean Supreme Court judge, acting Master Fidela Corbin Lincoln dismissed a case in which Bruce was claiming US$10,000 from Wilma Black-Williams and her husband, Clifford Williams.

Bruce, acting through his lawyer, Roderick Jones, filed a suit on April 14, 2015, claiming the sum as damages for breach of an oral contingency fee agreement allegedly made with the defendants for the provision of legal services to Williams and Black-Williams.

According to the judgement, Williams became ill during the course of his employment with Royal Caribbean Cruise Lines.

He engaged the services of Lipcon Marguiles, Alsina and Winkleman P.A. (Lipcon), a U.S. law firm, to represent him in his claim against his former employer.

The matter went to arbitration and Williams was awarded a substantial sum.

The U.S. firm provided a “Closing Statement” showing the net sum payable to Williams after deduction of attorney’s fees, costs and other expenses.

Black-Williams, a police officer in St. Vincent and the Grenadines, claimed that she had several queries about the closing statement and, therefore, began to engage in discussions with Lipcon with respect to same.

Bruce asserts that the Black-Williams attended his chambers and entered into an oral contingency fee agreement for him to provide legal representation to the defendants in relation to the negotiations with Lipcon.

He further asserted that Black-Williams and her husband agreed to pay him 20 per cent of all monies he secured in excess of the net award that Williams was informed would be paid to him.

The defendants, however, strenuously disputed almost every aspect of the Bruce’s version of events.

Black-Williams gave affidavit evidence on behalf of the defendants, saying that Bruce saw her at the Magistrate’s Court and enquired about her husband’s case against his former employer.

She further stated that she did not know how he became aware of the case but she discussed the matter with him.

Black-Williams told Bruce about her dissatisfaction with the closing statement provided by Lipcon and informed him of her intention to write them a letter.

In her affidavit, Black-Williams further stated that Bruce offered to let her use his letterhead for the letter so that the letter could appear more professional.

She, therefore, returned to the police station, wrote down the details to be included in the letter on a sheet of paper and took the paper to the claimant’s office.

She made several attempts to contact the claimant to follow up on the letter. Each time she contacted Bruce to get a copy of the letter he could not provide her with a copy or he avoided her.

Black-Williams and her lawyer asserted that they did not enter into an oral contingency fee agreement with Bruce.

She further asserted that even if as alleged by the claimant there was an oral contingency agreement entered into among the parties, such an agreement is unenforceable.

In her ruling, Lincoln said that in her view, it would not be “appropriate for the court to provide an avenue for such agreements to be enforced as this could encourage breaches of the common law and erode the protection, which it provides to the public”.

The judge said that in the circumstance, she finds that Bruce’s submission that he should be awarded reasonable remuneration for his services “does not form part of his claim and, even if it had been pleaded, such a claim would have no real prospect of succeeding.

“In conclusion, I find that the claimant has no real prospect of succeeding in his claim and accordingly summary judgment is entered for the defendants.”

The judge further noted that the counsel for the defendants, Sten Sargeant, a Vincentian attorney, had submitted that the case brings into sharp focus the need for legislation regulating legal practitioners in this jurisdiction.

“I agree, but would add that even in the absence of legislation, engaging in good client care practices — such as ensuring that a written agreement which complies with the law is executed — would alleviate the problems which arise in disputes regarding the terms of legal fee agreements.”