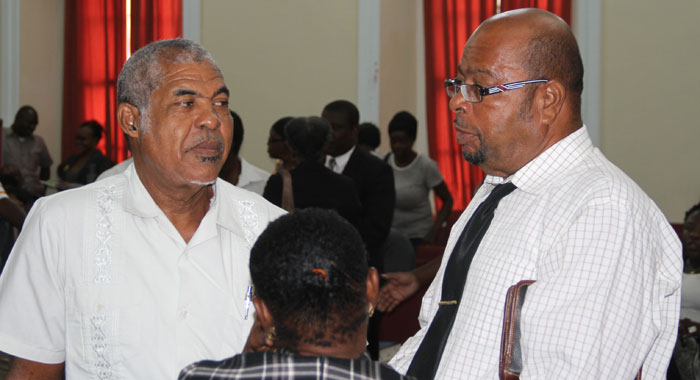 Lawyers for the government in the election petitions agreed to allow the opposition to inspect the ballot boxes in an effort to avert another embarrassing legal defeat, a source with knowledge of the case told iWitness News on Tuesday.

Last year, lawyers for the government vigorously opposed an application by counsel for the opposition asking the court to grant permission to inspect electoral documents from Central Leeward.

The main opposition New Democratic Party (NDP) is contesting the result of the Dec. 9, 2015 general elections in Central Leeward and North Windward, where it was represented by Ben Exeter and Lauron “Sharer” Baptiste.

The NDP has filed election petitions challenging the Unity Labour Party’s (ULP) victory in those districts, and as part of that challenge, filed in June an application asking the court to grant permission to inspect the electoral documents, including ballot boxes from the elections.

iWitness News understands that the government’s legal team made long legal submissions making similarly strong augments against the application as made when it was first made and denied last year.

When the application was first heard in late 2015, High Court judge, Justice Brian Cottle refused it, saying in a Dec. 28, 2015 ruling, “I do not consider that the applicant has shown any grounds, far less any strong grounds, to grant the application.”

The judge cited the ruling of the Court of Appeal in Trinidad and Tobago in relation to petitions stemming from the elections there in 2015.

While he noted that the laws in that CARICOM nation are different from those in St. Vincent and the Grenadines, Cottle said, “I, too, feel that to grant the application as filed would be akin to …  ‘permission to embark on an unfettered roving commission of inquiry. The only legitimate parameters are those circumscribed by the grounds and materials facts contained in the (application) in light of the relief sought and the relevant law.’”

In June 2016, Cottle dismissed the petitions as improperly filed, a decision that the Court of Appeal overturned in March 2017 and reinstated the petitions for hearing before a different High Court judge.

When the application to inspect the ballot boxes came up for hearing at the High Court on Tuesday, lead counsel for the petitioner, Stanley “Stalky” John told the court that legal practitioners for the respondents had written to the court indicating that they have agreed that a certain course of action ought to be adopted in relation to the motion.

In his presentation to the court, Kenny Kentish, a lawyer for the government in the matter, said that the draft order provides for inspection of the ballot boxes and ballot papers in four polling stations in Central Leeward.

Kentish told the court that the draft order contemplates that inspection is to commence at 9:30 a.m. on Wednesday, Oct. 25.

He said it was the intention of the respondents to appear before the court on Tuesday and present the draft order for the judge’s approval.

But as the judge asked the respondents a series of questions related to the order, Kenny said that he would prefer Trinidadian Senior Counsel Douglas Mendes, who was involved in preparing the draft consent order to respond to those questions.

Mendes was not in court because of flight issues and the government’s legal team asked the court to adjourn the matter to Wednesday morning.

John objected, saying that he would agree to an adjournment until 2 p.m. Tuesday.

The judge, however, granted an adjournment until 9 a.m. today (Wednesday).

Justice Henry said that Mendes’ travel itinerary, the fact that he was travelling with LIAT, and the location between Argyle International Airport and Kingstown did not suggest that he would arrive at court before 3 p.m. Tuesday.

The announcement of the decision by the government’s legal team regarding agreeing to allow inspection of the ballot boxes came as a shock to many observers.

Prime Minister Ralph Gonsalves had the 2015 judgement by Justice Cottle refusing the application to inspect the ballot.

“Oh, I read the judgment, and, as an experienced lawyer, it’s a magnificent judgment; well-written, well-argued,” Gonsalves had said.

“The judgement said they applicant, Mr. Ben Exeter, had neither the law nor the facts on his side and that it was in the nature of a fishing expedition. And the court is not the place to go fishing. That is well-established,” the prime minister had further noted.

Some observers have long argued that if the government has nothing to hide, it would allow the opposition to inspect the election documents.

Some persons have also argued — like Justice Brian Cottle ruled when he refused the first application last year — that granting access to the ballot boxes would betray the secrecy of the vote.

But Gonsalves, who has ministerial responsibility for electoral matters, had avoided commenting on this element of the judgement, even as he celebrated the ruling.

“I am not discussing any particular aspect of the judgement except to say that the judge said that you must have strong grounds for such an application and that there were no grounds. He quoted the law and he quoted the facts,” he had said.

But this also shocked voters since that ballots should be designed in such a way that one cannot tell, merely by looking at any counterfoil, how someone voted.

Supervisor of Elections Sylvia Findlay has declined to comment on whether election ballots could be matched to counterfoils and thereby reveal how someone voted.

Asked in January 2016 if ballot and counterfoils can, in fact, be used to determine how someone voted as the judge said, Findlay told iWitness News:

“I don’t think I ought to try to make a judgement on what the learned judge would have said. He listened to all the facts and he made a judgment. It’s not for me to say whether I think it’s fair or not.”

Pressed about whether the judge’s comment reflects the voting process, Findlay said:

“I will not comment on that because that was issued by the judge and he has knowledge of the system and how it operates and all of that. Those things would have been given to him, so I am not going to comment on that.”

The design of the ballots has formed a central plank of the NDP’s contest of the outcome of the elections, which electoral officials say the ULP won — for a fourth consecutive term in office — by taking eight of the 15 parliamentary seats while the remainder went to the NDP.

iWitness News understands that, politically, the ULP administration is considering pushing a public relations argument that because the government has nothing to hide, its legal team would no longer oppose the application to inspect the ballot boxes.

The source said that the government would present its revised position as one taken in the interest of “transparency”.

The source said that when the opposition’s legal team responded with counterarguments, the government’s team went silent for some time before responding with a proposal of the draft consent order that it presented to the court on Tuesday.

“The reason is that they have nowhere to go legally. If they did not consent, the opposition team would have cornered them legally,” the source said.

The source said that the government’s legal team seems to have made a political decision, fearing that if they were to lose the legal arguments surrounding the application to inspect the ballot boxes, it would be been the third legal defeat in a row.

The source noted as the other two legal losses for the government, the ruling of the Court of Appeal in March that re-instated the petitions after Justice Brian Cottle threw them out last year as improperly filed, and the subsequent ruling of Justice Henry, that the petitions are valid and can proceed to hearing.

iWitness News was told that it would have been difficult for the government to mount a successful argument against the application to inspect the ballot boxes in light of the contents of affidavits filed by Findlay-Scrubb and Returning Officer for Central Leeward, Winston Gaymes

The hearing resumes at 9 a.m. today.