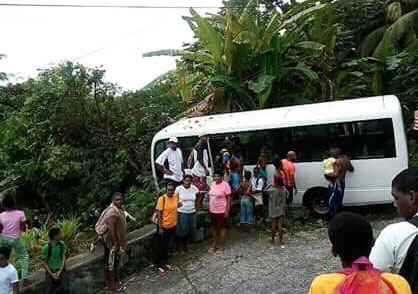 The government-owned school bus bought to replace the privately owned one that crashed in Rock Gutter in January 2015, claiming the lives of seven students, crashed on Wednesday.

It is the second time that the bus has crashed since it was commissioned in March 2015 to transport students to and from Fancy, the northern-most community in St. Vincent.

Initial reports are that a part of the bus went over an embankment in Sandy Bay as it transported students to school.

There are no reports of injuries so far.

Wednesday’s crash occurred days after the bus returned to service after a head-on collision in June in Orange Hill with a vehicle belonging to the Central Water and Sewerage Authority, a state-owned company.

During that incident, at least one student who survived injuries she sustained in the deadly crash in 2015 was hurt again.