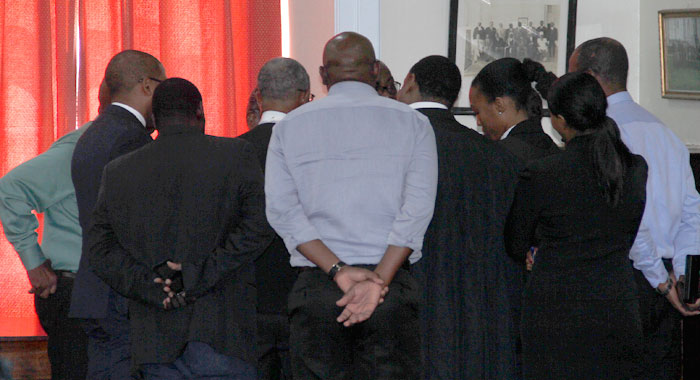 Lawyers for the NDP and the petitions in discussion during ta hearing in the matter in October 2017. (iWN photo)

Lawyers for the opposition in the election petitions on Wednesday rejected a draft consent order, which would have allowed the petitioners to inspect the unused ballots from four polling stations in Central Leeward.

“I must say, M’lady that I would be surprised if counsel on the other side is surprised by us not agreeing that we would not restrict ourselves on the petitioners’ side to the inspection of only four boxes,” Queen’s Counsel Stanley “Stalky” John, the head of the petitioner’s legal team told the court after the consent order fell through and the respondents asked for an adjournment.

John told the court that he would not attempt to say anything about the discussion between him and Senior Counsel Douglas Mendes, one of the respondents’ lawyers, which led to the draft consent order.

“I’d rather not address that here. I don’t think it is appropriate,” John told the court.

The court had earlier granted a one-hour adjournment to allow both sides to discuss amendments to the draft order.

But after the adjournment, John told the court that lawyers for the petitioners have always made it abundantly clear that the petitioners wish to inspect all 15 ballot boxes, and, where possible, used ballots, counterfoils used in Central Leeward during the Dec. 9, 2015 general elections.

“It appears from where we wrapped up that that understanding we thought would have been open to us is not open to us. Therefore, there is no basis on which to consider the consent order,” John told the court in rejecting the proposed consent order.

The government’s legal team had presented the proposed consent order to the court on Tuesday, when High Court judge Justice Esco Henry was scheduled to begin hearing arguments on a motion by the petitioners to allow them to inspect documents related to the December 2015 general elections.

After the proposed consent order was rejected, the judge told the court that she would hear arguments on the June 29, 2017 motion to inspect the ballot boxes.

The respondents in the petitions, led by Mendes, however, told the court that since his side had believed that they had a consent order to present to the court, the normal preparations for the motion did not take place.

He, therefore, asked for an adjournment.

Mendes told the court that he appeared before the High Court in St. Kitts on Monday in another matter and because of the number of documents he had to travel with, “and because I took my learned friend at his word, indeed his written word, that we had a consent order, I did not bring my papers with me”.

He said that on the basis of the email communications between him and John, and because they had arrived at a consent order, he did not expect that there would be oral submissions on the matter.

Mendes told the court that he discovered only during the one-hour adjournment on Wednesday that John did not agree with the consent order to the extent that it only allowed for inspection of ballot boxes from four polling stations.

“It was very clear from discussions we were having that we were agreeing only to the inspection of unused ballots in relation to those boxes,” Mendes said.

The other members of the respondents’ legal team made similar submissions and also asked for an adjournment.

The petitioners did not object to an adjournment for a date as soon as the court could accommodate them.

The judge set December 2017 or January 2018 for hearing of the motion, whichever is the earliest convenient date for all parties.

Justice Henry had begun a hearing on the matter on Tuesday, when the court was scheduled to hear arguments on an application by the petitioners to inspect electoral documents.

But on Wednesday, Mendes made it clear that should the petitioners agree to the draft consent order, his team would oppose any future application to inspect electoral documents.

Mendes’ position was outlined after John, with whom he had deliberated before coming to the draft consent order, informed the court that the petition would still reserve their right to file further applications to inspect documents as the trial proceeds.

On Tuesday, Henry had questioned the government’s legal team about the actual meaning of certain words in the draft order.

Kenny Kentish, a member of the government’s legal team, had told the court that he would like those to be addressed by Mendes, who was not in court that day because of flight issues.

On Wednesday, John told the court that he was sympathetic to the concerns of the judge regarding the implementation of the order.

The disagreements between the two sides over the consent order emerged as Kay Bacchus-Baptiste, a member of the petitioners’ legal team, made certain suggestions about the execution of the consent order.

Bacchus-Baptiste asked that the court to instruct the registrar to make a record of the manner in which the contents of the ballot boxes were secured in relation to rules 41(8) and (10) and 42(1) of the House of Assembly Election Rules.

The lawyer also asked the court to instruct the registrar to make a record of the design of the ballot paper, relative to the same rules.

At this point, Justice Henry asked Bacchus-Baptiste if it was contemplating asking the registrar to testify in the proceedings.

The lawyer, however, said that she was just asking for a record of the conditions of the ballot boxes and their contents when received by the registrar.

She further told the court that the mechanism of the execution of the order should include instruction for the registrar to say whether the ballot contained a designated space for the official mark to be placed, in keeping with Rule 16 of the House of Assembly Election Rules.

Bacchus-Baptiste’s final request to the court was to ask whether photographic evidence might assist the court, “Entirely for the court’s consideration.”

Mendes, in response to Bacchus-Baptiste, noted that the motion to inspect the ballot boxes relates to the petition filed by Exeter.

He said he was not aware that Bacchus-Baptiste was representing Exeter, adding that he was not sure whether the lawyer had the consent of her senior — John — to make these suggestions on his behalf.

Mendes told the court that Bacchus-Baptiste’s suggestions were remarkably similar to an original draft of a consent order that John had sent to him.

Mendes said he had rejected John’s proposal, adding that the consent order that the respondents presented to the court on Tuesday was the one that was being discussed.

Mendes said he did not know on what basis Bacchus-Baptiste was making suggestions of amendments to a draft consent order “that she had nothing to do with”.

“So if we are going down that road, M’Lady, effectively, what is being done through Ms Baptiste is to try to introduce, through the backdoor, an order in respect of which there is no consensus on this side.

“And if that is the case, M’Lady, then we would have to start from scratch and argue the motion from the beginning.”

Mendes said that the petitioners have to make up their mind whether they are consenting to the order.

John had earlier told the court that even if the consent order is accepted, the petitioners reserve the right in the future to make other applications to inspect other election documents.

Mendes told the court that the respondents also reserve his position to oppose the motion on the ground that, among others, res judicata.

Res judicata is a Latin phrase referring to a principle in law that a matter that has been adjudicated by a competent court and, therefore, may not be pursued further by the same parties.

“My learned friend cannot hope, I respectfully think, to enter into a consent order which he compromises his rights on a notice of motion and then files another application to seek to get what he has already forgone,” Mendes said.

Kentish adopted Mendes’ suggestions, adding that it appears to him that there is an attempt to alter the consent order arrived at by the parties.

He said that the petitioners would object to such a move, for the reasons mentioned by Mendes.

But in response, Bacchus-Baptiste told the court that she also represented Exeter in the proceeding.

She said that the petitioners had no intention to alter the consent.

“Let me make that clear. What I spoke about was based on your comment, M’Lady, about directions for executing the order. It has nothing to do with the consent order per se,” Bacchus-Baptiste, told the court.