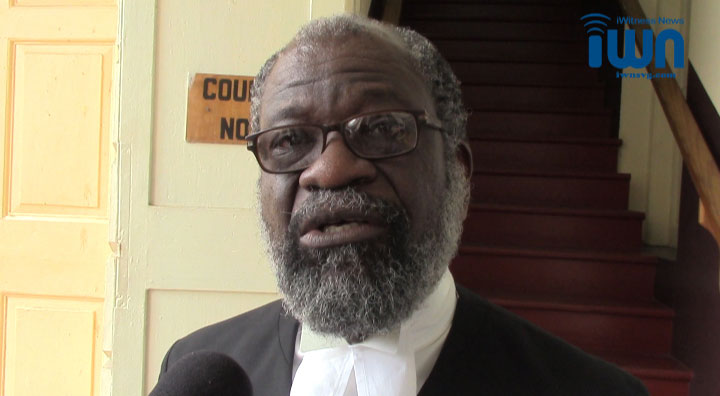 The lead counsel for the opposition (the petitioners) in the election petitions case says that his side never agreed to inspect only four ballot boxes from Central Leeward, one of the constituencies at the heart of the petitions.

“We thought we had an agreement and essential to that agreement is that at some point, when it is appropriate, after the inspections of these four ballot boxes that we agreed on, the petitioners would be able to seek inspection of other ballot boxes, but it seems that the other side doesn’t think that,” Stanley “Stalky” John, Queen’s Counsel told iWitness News on Wednesday.

John was speaking outside of the High Court in Kingstown after rejecting a proposed consent order after almost two days of deliberation.

Justice Esco Henry was scheduled to hear on Tuesday and Wednesday a June 29, 2017 application filed by the petitioners to inspect ballot boxes used in Central Leeward during the Dec. 9, 2015 general elections.

At the beginning of the proceedings, with Mendes absent because of flight issues, Kenny Kentish, a lawyer for the respondent, addressed the court on the draft consent order.

However, when Justice Henry questioned him on the interpretation of the certain words contained in the proposed consent order, Kentish said he would prefer if Mendes spoke to those, as it was he and John who had reached the compromised.

But on Wednesday, as the court heard submissions from the petitioners and respondents, it because clear that they were at variance in terms of their understanding of the proposed consent order.

After a one hour adjournment given to allow both sides to rework the draft, John informed the court that there was no basis on which to continue deliberation on the draft consent order.

“The agreement was for the inspection of these first four ballot boxes but having inspected them, that the petitioners would be able to inspect further ballot boxes,” John told iWitness News after the proceedings were adjourned on Wednesday.

John had told the court that he would be surprised if the respondents were surprised by his side’s objection to being constrained to inspecting only four ballot boxes.

“… simply because of the discussions we had had when we arrived at this,” John told iWitness News when asked about his comments about possible surprise.

“And I don’t think I want to speak to the media about what I discussed with counsel,” he said, echoing his comments to the court.

“But we have correspondents that reflect exactly the basis on which we agreed to the inspection in the first instance of those four [ballot boxes],” John further told iWitness News.

“We indicated clearly at all times that we wish to have all the ballot boxes inspected. To the extent that having four ballot boxes inspected, in the first instance, would have facilitated the process, save cost and time, we agreed to proceed on that basis but not by doing so, preventing the petitioner from having access to inspection of further ballot boxes,” John told iWitness News.

“And for the first time today, we were told that that is the position they are adopting.”

Speaking to iWitness News separately after Wednesday’s proceedings, Carlos James, a lawyer for the government, said the respondents were ready to proceed with the inspection of the boxes.

The draft consent order had said that that inspection should have begun Wednesday morning at 9:30 a.m.

“… unfortunately, a consent order which was provisionally agreed on by both sides, … the opposition side has decided that they no longer wish to agree the consent order,” James said.

Asked if he was surprised by this, James said, “None the least. But the matter proceeds. It is just procedural matters to be resolved at this time and we will see how it goes.”

James said that the government side had agreed to inspection of the four ballot boxes in the interest of “openness and transparency”.

“… in all openness and transparency regarding the matter, we were happy to facilitate by way of a consent order an agreement to allow the inspection of the particular boxes requested. But, unfortunately, that did not take place today.”

Asked why wasn’t there this same “openness and transparency” in December 2015 when the application to inspect the ballot boxes was first filed, James told iWitness News:

“That is for the matter to discuss later on in court. So you know how that is already.”

Richard Williams, another member o the government’s legal team told iWitness News that his side was quite taken aback that the petitioners’ counsel have decided now that they no longer want to go ahead with the agreement. So we are back to square one.”

Asked about John’s comment that he would be surprised if the respondents are surprised by his rejection of their proposal, Richards said:

Keith Scotland, a lawyer for the petitioners, told iWitness News that his side tried to move the matter forward.

He said it was unfortunate that the proposed consent order was not entered into on Wednesday.

“We are now clear that the lines are now drawn, each party knows what the process is and what their possession is. And what we do, is that we lawyer the case through now… In keeping with the rule of law, both sides would advance their position before the court,” Scotland told iWitness News.

The judge instructed the parties to discuss with the registrar of the High Court the most convenient date in December 2017 or January 2018 for the hearing of the petitions.

The main opposition New Democratic Party has filed two petitions challenging the outcome of the elections in North Windward and Central Leeward.

Those two were among the eight seats that electoral officials say the Unity Labour Party won for a four consecutive term in office.

The remaining seven of the 15 parliamentary seats went to the NDP.