Youth focus on entrepreneurship at dialogue with Opposition Leader 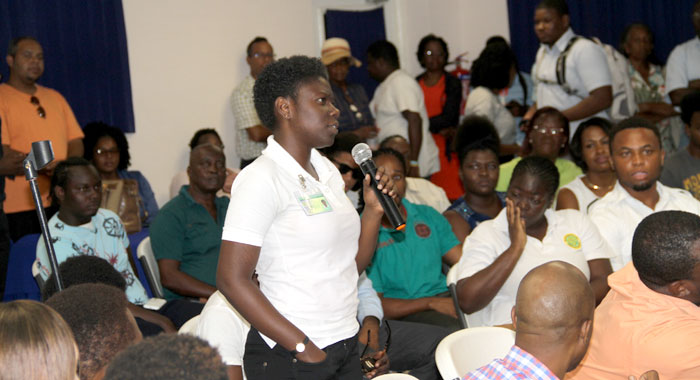 Opportunities for youth entrepreneurs was a recurring focus among the young persons who spoke at Leader of the Opposition, Godwin Friday’s National Youth Dialogue in Kingstown on Thursday.

The event, said to be the first of its kind in St. Vincent and the Grenadines (SVG), was organised to provide a forum in which young professionals, youth organisations and youth leaders throughout the country could share ideas and challenges on national issues.

Meisha Cruickshank began the question session by asking Friday to outline the plans NDP’s has for private sector development in St. Vincent

She said that she and some of her colleagues started a business right out of university and while the business is still operating, it is only by the grace of God because things are “dead”.

Friday, who is also President of the main opposition New Democratic Party (NDP), said that Cruickshank is right to be concerned, adding that the pervasive comment across the country is about how business is slow.

He said that one of the big problems in the country stems from the approach of government to business, noting that investment in a country comes when there is confidence in the country, the government, and the state of security in the country.

“And the problem we have had with the present situation now, the present administration, is that they started out essentially almost in competition with the private sector. “

Friday said that the NDP and its parliamentary representative push more emphasis on developing the private sector.

He said such a ministry would assist anyone, regardless of their political affiliation, because the idea is that businesses create wealth and government taxes that wealth.

“Government, people in political office, always wants to exercise control, but when you do that, you are stifling initiative, you are creating an environment where people feel the only way they can get ahead is if they are properly connected rather than by their hard work and initiative,” Friday said.

But Darron Farrell, of the Southern Grenadines, wanted to know if it is really feasible to create a ministry of the private sector.

Farrell, a science student at the SVG Community College, noted that business is not science, where the result can be predicted exactly.

He asked Friday to how an NDP administration would help businesses to rebound after a slump in the economy.

The opposition leader responded that SVG has a free market system in which the market decides which businesses survive or fail.

“Government can’t necessarily pick winners and losers. That is a very risky business and normally, they will pick people based on political affiliation, not necessarily based on their business acumen or the prospects of their ideas succeeding,” Friday said.

He said there is a need to change the attitude that government is everything in the country.

“Government is there to serve, to facilitate. If individuals in a community can do something better than a government, why should government go ahead and take it over simply because it has the power to do so?” Friday said.

He said that the point in setting up a ministry of the private sector is to “concentrate everything into one focused ministry with someone who is targeted, who is skilled and who is willing to put in the work to make all of your ideas [work], give them the best chance of succeeding”.

The opposition leader noted that regardless of their location, internationally, more business ideas fail than succeed.

“But the point is, you want to create an environment where you have the best opportunity to succeed,” he said.

He said politics should not be used as an obstacle to the success of good business ideas that are succeeding.

“We should be facilitating,” he said.

Friday said that the NDP’s idea of a ministry of the private sector “is the big shift”, adding that the modalities will change as you go along to make it more effective.

“You have to be humble enough to know that you don’t know everything. And you have to learn from people who are in the industries, whether it’s farmers, fishermen, I.T. (Information technology) people, teachers, civil servants so that you get the best out of everybody.

“We are a country of 110,00 people on a good day. And so, we can’t waste any of our talent, any of our human resources. This is why you, young people, are critical, vitally important to the success of St. Vincent and the Grenadines.

“And we are operating in an environment that is different, that is quite new to us, because we don’t have protectionism from countries such as in Europe and so on. Everybody is saying you have to do it on your own. The IMF comes and says, ‘Well, you can’t spend so much on government services because you are only making so much money.’ And you have to cut your sail to suit the wind.

“So this is why I said initially that we have to grasp within ourselves that we have to do it for ourselves and where we get help, we take advantage of it. And we can’t put unnecessary obstacles in our way. This is why we are moving towards this ministry,” Friday said.

He said that the emphasis of an NDP government under his leadership will not only be on a ministry of the private sector.

Friday said that is why the topic is important.

“We have to re-imagine how we do things in St. Vincent and the Grenadines and you, young people are so critical to it. Don’t just simply think that we need you to come out for when we have entertainment and you come to a party and so forth. Of course, you’d like to do that. I did that in my time, too. But, you have a lot more important role to play, and we hope we are starting that today and if it fires one person to think differently as to what contribution I make to my country in terms of how I use my talent and my skills, then it would be worthwhile,” he said.