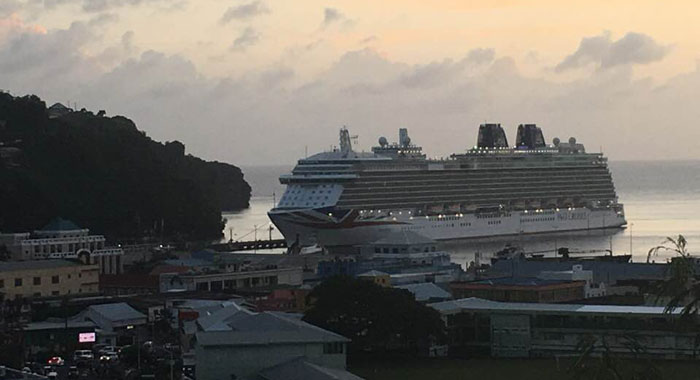 Britannia in Kingstown at dusk on Nov. 8. (Photo: Dexstar Rose/Facebook)

Three men assaulted and robbed in Kingstown on Wednesday a group of passengers from the cruise ship, Britania during its first call to the city this season.

A witness told iWitness News that the crime took place at Bentick Square (along the Road to Leeward near Milton Cato Memorial Hospital) around 1 p.m.

The witness said that the group of seven male and female visitors, said to be in their 60s, were walking near the Chinese restaurant on Bentick Square when three men approached them.

The men choked one of the male visitors and burst a piece of jewellery from around the man’s neck before fleeing in the direction of Massy Store in Stoney Ground.

An off duty police officer gave chase and caught the man, but the assailant escaped after trading punches with the police officer.

The witness told iWitness News that the group was shaken up after the incident and many persons in the area, including staff of the MCMH came to their assistance.

The incident could potentially put a stain on St. Vincent and the Grenadines as the nation is expected to received 270,000 cruise passengers this season, twice last year’s figure and three times that of 2015.