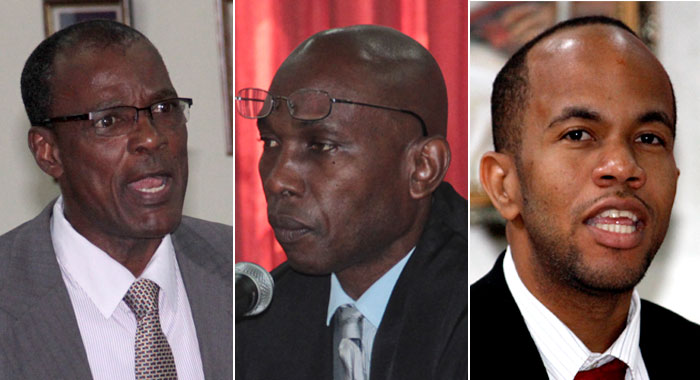 Speaker of the House of Assembly Jomo Thomas on Tuesday asked Minister of Health, Sen. Luke Browne, to withdraw comments he made about opposition lawmaker Daniel Cummings over a question that Thomas later said should not have been allowed.

“I thought that when the minister (Browne) told you (Cummings) that your question was in violation that he was on point, but I thought he proceeded to do certain things which I believe you rightfully objected to,” Thomas said at the end of the question period, about 45 minutes after the development.

He added: “Because if the question cannot entertain arguments, inferences, opinions, imputations, epithets, ironical expressions, or hypothetical cases, it stands to reason that the answer cannot do that as well. And, I thought that’s where the minister might have gone too far and that is why I told him to withdraw it.”

The development came as Cummings, who is Member of Parliament for West Kingstown, asked Browne, a senator and Minister of Health, the following question:

“There has been this year, numerous cases of persons dying at the MCMH in circumstances that are, to say the least, bewildering. Have any of these been seriously investigated.

(a) If so, which case/cases and by whom were they investigated;

(c) Is the recent death of the pregnant lady from South Rivers included in any investigation?”

Browne, in response, said, “Mr. Speaker, if anything, it is this question that is bewildering and it probably does not even comply with the rules of this honourable house in that it likely violates on multiple counts Standing Order 20, which deals with contents of questions.

“Moreover, there is, of course, no way of knowing what is or is not bewildering in the mind of the honourable member for West Kingstown and, therefore, the question, strictly speaking, cannot be answered. I wish that the honourable member would concentrate his energies on asking sensible and intelligible questions in their parliament and be less preoccupied with playing politics, making cheap shots and seeking to plant wrongful perceptions in the mind of the public.

“Be that as it may, I am happy to provide some information in reply to what was asked, not so much—”

Cummings then rose and said, “Mr. Speaker, I cannot sit here, Mr. Speaker, and allow my character, my motive for writing a question, to be dragged into the mud by an individual who is obsessed with certain characteristics I cannot explain.”

“And to impute very improper motives to my question is entirely out of order and I ask that you deal with it, please.”

“The imputation is incorrect,” the speaker told Browne.  “You should take it back.”

“Well, I am not sure what imputation I should take back,” the health minister responded.

“The imputation is incorrect. You should take it back,” the Speaker repeated.

“I don’t know what imputation I should take back,” Browne said.

“You know what you said,” the Speaker responded.

“What I said is [that] it is not possible to determine what is bewildering in the mind of the Honourable Member for West Kingstown,” Browne explained.

He added: “And I cannot take that back because it is not possible. Is that what—” Browne said, then went on, as if continuing his response to Cummings, to say, “Be that as it may—”

“Excuse me, you can’t continue you know,” Thomas told Browne.

“But what would you like me to take back, Mr. Speaker?”

“You are impute—the Honourable Member is alleging that you are imputing improper motives to his question and you should proceed to answer the question without imputing motive,” Thomas told Browne.

“Ok. I –I withdraw any imputation of improper motive. Arhm—”

In response to Cummings’ question, Browne said that there are several review protocols at the hospital, but said that patient specific information cannot be divulged for confidentiality reasons.

“Mr. Speaker, be assured that if there is any complaint that justifies review, such a review will be conducted forthwith and its results published to the relevant persons and authorities and [with] the highest regard for transparency, patient rights and justice.”

Browne said that if any negligence is ever found in the management of patients, there is recourse under the law.

After Browne’s response, Cummings said that the question was not answered but he would move on.

Speaking at the end of the session, Thomas told lawmakers that they pay attention to standing Order 20, which has to do with the context of the questions.

The Speaker said he was “in substantial agreement” with Browne when he said Cummings’ question violated “a number of tenets having to do with that section”.

The Speaker said that in his mind, the question violated Section 20(a) –“The proper object of a question is to obtain information on a question of fact within official cognisance of the minister to whom it is addressed or the attorney general or to ask for official action.”

He said he also thinks that the question violated 20(c) — “If the question contains a statement of fact, the member asking it should make himself responsible for the accuracy of that statement and no question shall be based upon a newspaper report or another official publication”.

“And certainly, I think it also violated 20(f) — ‘A question shall not contain arguments, inferences, opinions, imputations, epithets, ironical expressions, or hypothetical cases.’

Thomas, however, cautioned all members to pay attention to the formulation of questions.

Cummings then said that in the circumstances, it can be clarified by the presentation of the facts that led to the question.

“And that’s an option that the House can pursue. I do not lightly bring questions to his House. I have evidence to support my question. I have the evidence and if it is requested, I can produce it,” the opposition lawmaker said.