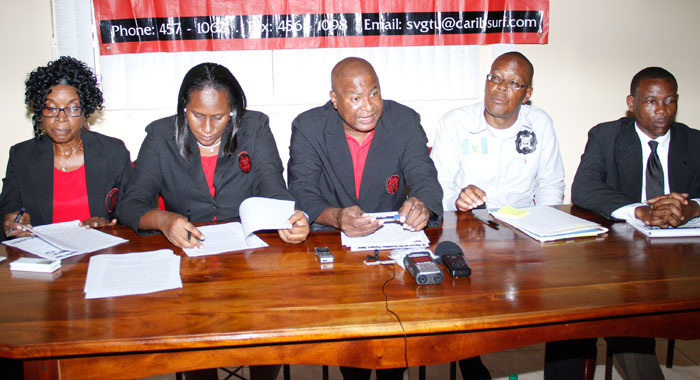 Members of the executive of the Teachers’ Union at the press conference. (iWN photo)

Teachers are dying of stress and other work-related conditions, the St. Vincent and the Grenadines Teachers’ Union told a press conference this week.

“A number of teachers are dying of stress. People are saying we are living longer but over the last five years, many of our teachers have been kicking the bucket,” president of the Teachers’ Union, Oswald Robinson told the media this week.

“Who is looking out for the welfare of our teachers? It’s the union, the Teachers’ Union. Nobody else and that is how the struggle will continue.”

Asked how many teachers have died of stress over the past five years or so, Robinson said, “Well, the figure is so big, I can’t even quote it.”

He later said that the figure is between eight and 10 teachers annually.

The union head said, listed among the causes of death, “Stress, too much work, poor work conditions; teachers dying of cancer and you don’t know these bat droppings, the respiratory system being — kidney related issues; overwork, you understand? Unfair treatment, low salaries.”

Robinson’s comments came at a press conference in which he said teachers and students at two schools have to cope with bat infestations.

Asked if these causes of death have been placed on death certificates, Robinson said, “Well, the medical records are strictly confidential so those will not be divulged to the union.

“But, you have many teachers dying.”

Robinson said that the union executive has to attend the funeral of many teachers and said the number of teachers dying is putting a strain on the union’s death benefit fund.

Paulette Williams, the union’s general secretary, told the press conference that more than the ones who have died, many teachers have survived who are affected by stress and other conditions that the president mentioned.

“We have one teacher, for instance, who has a persistent cough. She works in an environment — who knows what bat dung does to you. And the doctor has established a possible link between her persistent cough and the fact that she teaches in that kind of environment.”

Robinson, however, said that the union has not done any scientific research to ascertain that work-related stress rather than issues in teachers’ personal lives, in fact, have caused the illnesses.

“The testimonies of these teachers, when you interact with them,” he said. “There is strong evidence.”

He said doctors are reducing the number of patients they are seeing within an hour.

“I don’t think any doctor would want to see more than a hundred patients, but teachers have to interact with sometimes a hundred-plus students, especially in the bigger schools.

“And when you go home, you have your families to deal with and you have to take home books to mark. The general secretary mentioned about [marking] SBAs [for Caribbean Examination Council exams]. You have to do a lot of these things on your home time.

“There are a number of secondary schools today, during the vacation, they still have to go back and have classes because you have students, you literally have to get on their backs to get them to do their work.”

The union president said that in areas where there are unstable families, a lot of teachers have to take up the slack.

“The state is demanding, the society is demanding more of teachers, but nobody is looking out for the welfare of the teacher. The teacher is not a robot, the teacher has feelings too, flesh and blood.”

Robinson said that there are some teachers who go to school even when they are ill.

“And sometimes, we say you love your work more than yourself,” he said.

One reply on “Teachers ‘dying of stress’ in St. Vincent”