‘The NDP is indivisible’ — party leader 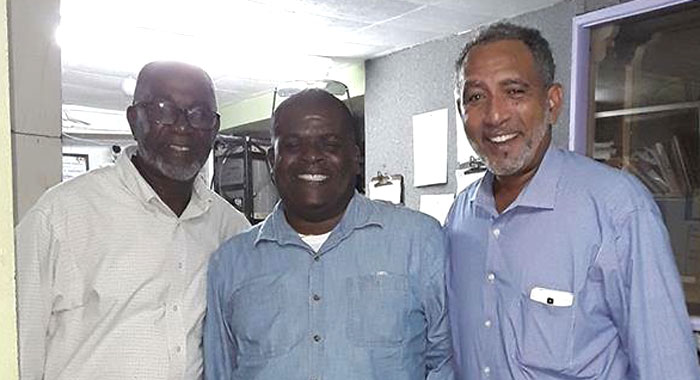 Persons who were hoping that Member of Parliament for Central Kingstown, St. Clair Leacock, would have walked away from his New Democratic Party (NDP), have a new guess coming.

“The NDP is indivisible. We are one in our cause to bring prosperity to St. Vincent and the Grenadines,” party leader, Godwin Friday said on “New Times”, the NDP’s programme, on NICE Radio on Tuesday.

Friday, who is MP for the Northern Grenadines, appeared on the programme together with Leacock and Matthews one day after Leacock again took to radio to express what he presented as his frustration with the party for not addressing a number of matters that he sees as important in improving its chances at the next elections.

The NDP has been in opposition since March 2001, when it was booted out of office after 17 years.

But Friday said that notwithstanding the recent development, the NDP is united.

“We have a proud history in the New Democratic Party, we have a foundation on which we have built. We have in the present leadership and base of our political party what is required to bring development and prosperity to St. Vincent and the Grenadines,” said Friday, who in November 2016, succeeded East Kingstown MP, Arnhim Eustace, as NDP president and Opposition Leader.

“We have had our ups and downs. We are a political party. I tell people this, you would always have differences and a lot has been said recently about the public washing of linen, so to speak, in the public. But we always believe that with dialogue and a coming together of the mind to resolve those differences that the party would be stronger and go forward.”

The NDP leader said during his meeting with Leacock and Matthews on Tuesday,

“… we had a lot of frank discussion and a lot of the issues that would concern our base, our membership, and persons who are looking and those who are wishing us well and those who are not. What I have to say is that the NDP is a united force going forward to build St. Vincent and the Grenadines.”

Friday said that the NDP has a common purpose, which is to remove the Unity Labour Party from office.

“We are here today — myself as the president of the New Democratic Party, I have beside me my two vice-presidents, in Roland “Patel” Matthews and St. Clair Leacock who stand resolute in that commitment, that we stand resolute in that commitment, which is to remove the ULP from government and for us to go forward on behalf of the people. It’s not about me, it’s not about Patel, it’s not about Leacock. Ultimately, we are representing the hopes and dreams of all those people who are representing our party, who have suffered for our great party over the years when we have been in opposition.”

Friday said that the NDP knows how the ULP has governed.

“It has been a government of retribution against those who stand against it. Our members, our supporters deserve for us to say that ‘we put you first, we put our country first, we put the people of St. Vincent and the Grenadines first and that everybody, in an NDP government, would be treated equally, whether everybody who voted in an election, whether you voted for us, you voted for the other party, we hope most people or everybody would vote for us, but we have to develop St. Vincent and the Grenadines and make sure that everybody benefits and prospers.”

The NDP leader said that the party has to put the interest of the people first. He, however, said the party also has to maintain the confidence of the people.

“We have to make sure that our members know that they will benefit by bringing the New Democratic Party to government, because we will grow the economy.  There will be more opportunity for them to make a living, there will be more opportunity for their children to study, to go to school. All these things contribute to the good life, which we want to create in St. Vincent and the Grenadines.”

The leadership of the NDP and all of its members are unwavering in their commitment to achieving the goal of improving things in SVG.

“And that is something that cheers my heart, and I am sure it does so to all of our members and we will go forward in this the Christmas season and beyond to ensure that we deliver that to the people of St. Vincent and the Grenadines. That is our goal.”

He noted but did not repeat the comments Leacock made recently, and said Tuesday’s meeting was extremely constructive.

“And so we will go forward to put the focus on the people of St. Vincent and the Grenadines and the unity of the New Democratic Party because that is the best way we can deliver to the people and for all of us working together,” Friday said, adding that the party’s executive is united in this regard.

“It is important that people understand that the differences that may have been exhibited, they are differences that do not break us, that we have come together, always, in the best interest of St. Vincent and the Grenadines and there are different ways in which to address some of those things.

“We have addressed a number of them internally and that’s the best way to do it. And for those who might have been rejoicing and thinking, ‘Oh, the NDP is this and the NDP is that, the NDP is divided’, that is nonsense. It has always been that the New Democratic Party puts the interest of the people of St. Vincent and the Grenadines as number one.”

Friday said the party knows that it can deliver because the party has a proud history of having delivered a better living for all of SVG.

He said that for the 17.5 years that the NDP was in office, the average growth rate was 5 per cent per annum

“In the last several years of the ULP administration, if they manage to get 0.1 per cent growth, they manage plenty, and, of course, there were three or four years of decline from 2008.”

He said the ULP has a few projects that they would point to and claim them as evidence of development, but they have not delivered on their promise.

“I always saw development as not about a project. Development is about people. It is about how that project transforms the lives of people,” Friday said.