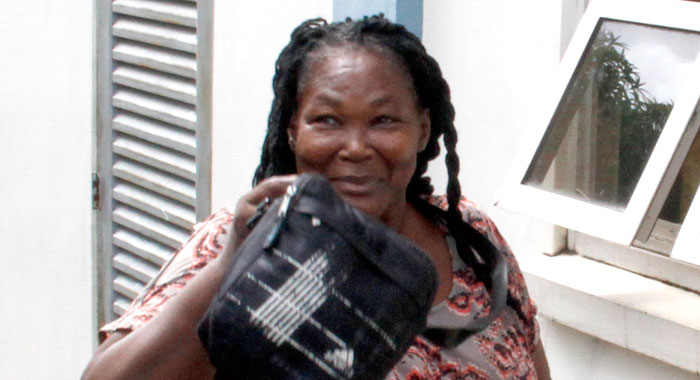 Corlita Charles leaves the Serious Offences Court on Monday, after paying the first $1,000 of her fine. (iWN photo)

A 53-year-old woman ended up having to pay a $2,000 fine for a portion of marijuana that she told the court she had asked for as a gift for her husband.

Corlita Charles of Chauncey pleaded guilty on Monday at the Serious Offences Court to a charge that she had 825 grammes (1.8lbs) of cannabis in her possession with intent to supply it to another at Kingstown last Friday, Dec. 1.

The court heard that a police officer on duty at the Grenadine Wharf was conducting searches on persons and cargo destined for the Grenadines.

Charles consented to a search and the police officer found two parcels secured with transparent wrapping and scotch tape.

The packages were found to contain marijuana.

When cautioned, the woman said, “Is weed. It belongs to me.”

The defendant told the court that she was working in Chauncey cleaning some dasheen when she saw two men pass by with the illegal drug.

She said she asked them for some of the marijuana and they asked if she was serious and she said ‘Yes’.

Charles said that she took the drugs home and wrapped it up and put it in the box to send to her husband.

The woman told the court she does not smoke or sell marijuana but was going to send it to her husband, who works in Bequia, to sell for her.

“Oh, that was like an earlier Christmas present. You wrap it up?” Chief Magistrate Rechanne Browne-Matthias, commented, seemingly light heartedly.

Charles, however, said that her husband would have been angry with her if he had received the unexpected “gift” of the marijuana.

The magistrate noted that the woman had pleaded guilty at the first opportunity and has no previous convictions.

“Unfortunately, you beg for trouble and I cannot let it go unnoticed because this is still illegal in the state of St. Vincent and the Grenadines.”

Browne-Matthias noted that the money to pay the fine could have been used to celebrate Christmas.

“Your husband mussie bin well know about the arrangement,” the magistrate said in the Vincentian vernacular, suggesting that she had doubts about the woman’s explanation.

Charles was ordered to pay EC$1,000 forthwith or spend six months in prison.