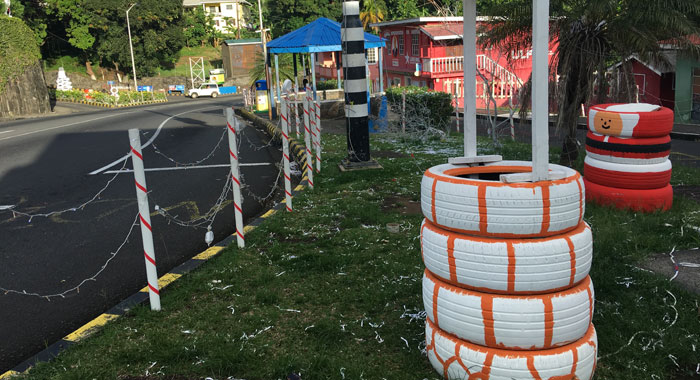 These tyres, used as part of Christmas decorations in Sion Hill, have become breeding grounds for mosquitos. (iWN photo)

The spent tyres that are being used as part of the Christmas decorations in Sion Hill have turned into a public health hazard.

The tyres were not perforated and an attempt by those who erected the decorations to keep them covered has failed and rainwater has settled inside the tyres.

Mosquitoes have begun to breed in the tyres, thereby creating a public health hazard.

A health care practitioner called the situation to the attention of iWitness News late last week.

When we visited on Christmas Day, we observed mosquito larvae swimming in the tyres and adult mosquitoes flying inside them.

The health care professional noted that the situation exists in the constituency where Minister of Health, Sen. Luke Browne, lives and which he is hoping to represent in Parliament.

The Ministry of Health and the Environment, as part of its public education campaigns, often reminds residents of St. Vincent and the Grenadines that tyres can become a breeding place for mosquitoes, which spread several diseases.

The ministry has repeatedly urged proper disposal of tyres and other items in which water can settle and become a breeding ground for mosquitoes.

4 replies on “Christmas decorations a health hazard in Sion Hill”