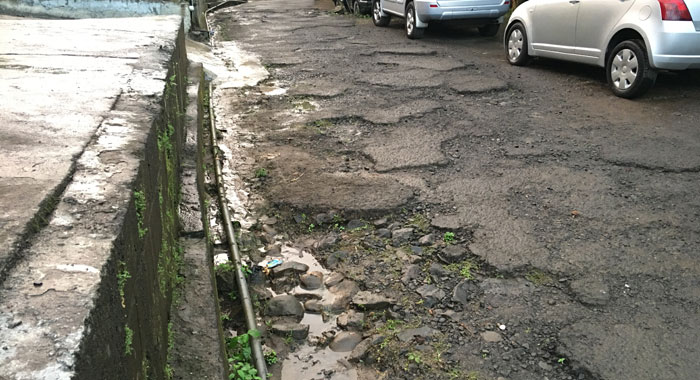 Diamonds residents were on Christmas Day more willing to talk about the state of their roads, than the shooting death of a fellow villager. (iWN photo)

Residents of Smith Valley, also known as Juggies, in Diamonds were mum on Christmas Day about what they might have seen or heard when a resident of the community was shot the previous night.

However, they were very vocal about the conditions of the roads there, where large potholes and poor drainage are the order of the day.

One homeowner who spends some of the year overseas said that she is often told that the next time she returns the road would be fixed.

However, over the past few years, this has never turned out to be the case.

As she asked iWitness News to go and see the section of the road near her house, another villager cautioned, “Hope you don’t puncture a tyre.”

The villagers say that the condition of the roads are appalling, noting that that is the situation in their home village of their parliamentary representative, Saboto Caesar.

But Caesar, who now lives in Cedars, a neighbouring community, has also been complaining about the condition of the roads in his constituency.

In a Nov. 29 post on Facebook, Caesar posted the following photo with the caption, “Looked at this road this morning again in our constituency … South Central Windward ….. when drainage is poorly engineered the result is always not positive!!”

In two comments under the post, he said, “Our road engineers have to guide us better… a lot more work with the changes in weather patterns” and “This wash in the road appears there every year ….. we have to add more science to it”.

On Sept. 22, the minister posted this photo of road repairs in the constituency.

Diamonds resident Andel Muckett died at the Milton Cato Memorial Hospital in Kingstown on Monday — Christmas Day — where he was being treated for gunshot injuries he sustained the previous night.

His death brought to 41, the homicide count in St. Vincent and the Grenadines for 2017 — a new record for a single year.

3 replies on “Mum about murder, residents complain about roads”