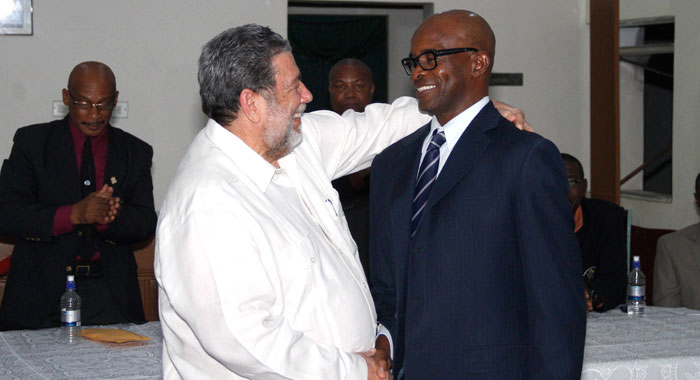 Prime Minister and Minister of National Security Dr. Ralph Gonsalves says that promotion within the police force must be addressed better.

“We have an old fashioned way of dealing with promotion. We have to modernise that,” he told the annual police awards event in Kingstown last Thursday, Dec. 28, 2017.

“It’s an embarrassment to the leadership of the force to hear that a young lady for the second time in three or four years … is voted the best policewoman and she is still a constable.

“Man something has to be done about that, man,” Gonsalves said to applause.

He was speaking about Edna Haywood who was voted Policewoman of the Year in 2015 and 2017 but was only promoted to acting corporal last week Thursday night.

“I’m not criticising the commissioner though promotion from constable to [sergeant] is within his domain. They have advisors.

“But there are a lot of people who are doing their work solidly, conscientiously and who are performing well. We must not forget them,” he said to more applause.

The prime minister said he was talking also because the chair of the Police Service Commission, Cecil “Blazer” Williams was at the event.

“The ranks going up, too,” the prime minister said, adding, “And sometimes he has to ask questions and he asks questions.

“I don’t want you to think that my head is in the sand. I overs (understand) what is happening. And because I am open, the commissioner speaks to me. He said, ‘Prime minister, I feel about this matter. I feel about this constable.’

“He also talked to me about the sergeant who is going to be the policeman of the year,” Gonsalves said, letting the cat out of the bag on that award as there was only one sergeant among the nominees.

Sergeant Meldon James was adjudged Policeman of the Year 2017.

“Well, Blazer, that is in your hand. Eh? That’s going up higher. That is above the commissioner pay grade,” the prime minister said to the chair of the Police Service Commission in an apparent suggestion that James should also be considered for promotion.

“We have to bear all these things in mind,” the prime minister said.