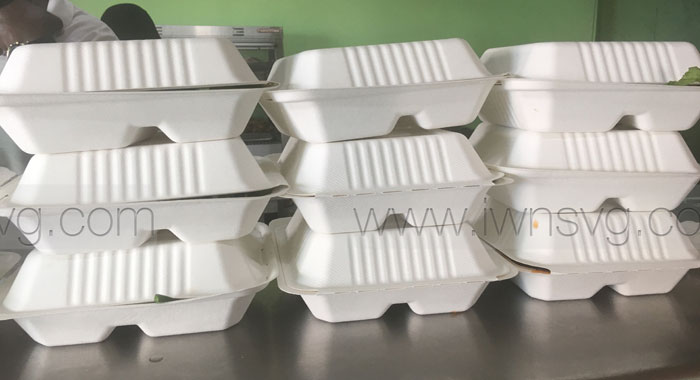 Meals packaged in biodegradable containers at a restaurant in Kingstown on Wednesday. (iWN photo)

Minister of Sustainable Development Camillo Gonsalves says he is “pleasantly surprised” with the use by vendors, especially food retailers, of non-Styrofoam products, even before the ban came into full effect.

The Styrofoam ban in St. Vincent and the Grenadines, which had a phased implementation beginning May 1, 2017, came into full effect on Monday, Jan. 1, 2018.

Among other things, the ban makes it illegal to import, manufacture, or sell Styrofoam food service products in SVG.

Speaking to iWitness News on Tuesday, Jan. 2, 2018, Gonsalves said that the Port has said that there is now very little Styrofoam even attempting to enter SVG anymore.

He said this is the case because the education in advance was sufficient.

“… most people who deal in Styrofoam changed their suppliers or changed the products that they were importing,” Gonsalves told iWitness News.

“So I’m very pleased,” he said but told iWitness News that he has raised with the Port one or two issues that bear watching.

He said that over the holidays, some supermarkets imported eggs in Styrofoam containers.

“I have my own view but I asked them to have their lawyers take a look at the wording of the Styrofoam ban to see if it’s the appropriate product to still be allowed in,” said Gonsalves, who is a lawyer.

He told iWitness News that his view is that the ban extends to Styrofoam egg trays.

“And I know that eggs are produced in other jurisdictions overseas in biodegradable containers so I know the retailers can import those products otherwise.”

He said that in his anecdotal conversations with food vendors, people seem to have accepted the change remarkably well.

“And I am quite pleased,” the minister said.

It was, however, noted that some retailers have switched to plastics to replace some Styrofoam containers.

The minister said that the government hopes that with the Styrofoam ban, biodegradable would be the predominant replacement.

“And I think that the early returns suggest that that is happening,” he said.

The ban does not extend to the Styrofoam packaging in which some appliances are shipped, which is also banned in some jurisdictions.

When the ban was announced, the government had said it was also framed after consultations with businesses.