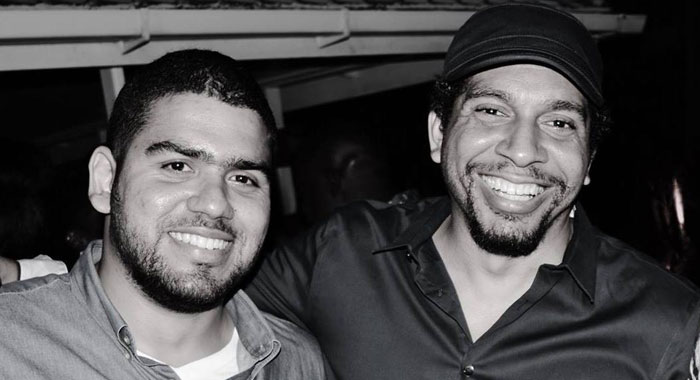 Storm Gonsalves, the younger brother of Finance Minister Camillo Gonsalves, says that the model sent for psychiatric evaluation last Friday, one day after she allegedly called the minister’s wife a “dirty b***h”, “succumbed to mental illness”.

He, however, denied that his brother, who is also Member of Parliament for East St. George, had a relationship with the 22-year-old model, Yugge Farrell, of Lowmans Bay (address originally given as Ottley Hall), as she claimed in Instagram videos since her hospitalisation.

“What kind of question is that?” Storm said in response to a question by Luke Boyea, one of the hosts of AM Mayhem on Hot 97 FM, when asked in a call to the programme on Monday, if Camillo had a relationship with Farrell.

Storm said that Camillo “definitely knows of” Farrell because of threats he (Storm) alleged the woman has made against his brother and his family, but said there “of course not” was no relationship between the two.

“Basically, I just want to let the public know that, unfortunately, Yugge Farrell was a shining star and she has a lot of potential and sadly, she succumbed to mental illness. Mental illness is not a joke. I’m very sorry it happened to her,” said Storm, who has no known qualification in psychiatry.

On Friday, Farrell appeared at the Kingstown Magistrate’s Court charged that last Thursday, Jan. 4, she used abusive language to Karen Duncan-Gonsalves, to wit, “you dirty b***h”.

But when Farrell’s lawyer, Grant Connell, rose and asked for bail for his client, prosecutor Police Constable Corlene Samuel, objected, saying that the Crown was asking that Farrell be sent to the Mental Health Centre for two weeks’ evaluation.

The prosecution presented no reasons to support their application to have the woman hospitalised and it was granted notwithstanding Connell’s strenuous objections.

iWitness News and a freelance writer were the only media representatives in court at the time of the arraignment.

Yugge Farrell gestures as she leaves the Kingstown Magistrate’s Court on Friday. She will spend two weeks at the Mental Health Centre. (iWN photo)Storm continued his onslaught on radio on Monday during the call in which he said he did not want to focus on what transpired in court, but on the “back story”, which he said everyone is trying to ignore.

In his call to Hot97, Storm began by saying that Kenton Chance, executive editor of iWitness News, willfully left a lot of facts out of his report.

He noted that in a post he made on the iWitness News Facebook page, Chance had noted that he had faithfully reported on what transpired in court.

Storm, however, said that he was more concerned about “what story would serve the people better, the readers, better.

“Is it just the strict — what went on in the courtroom or what happened outside the courtroom?” Storm asked listeners.

Boyea asked him how else the case could be judged other than by what happened in the courtroom.

Storm claimed that Farrell has also made “personal threats via letters and emails and all sort of things.”

When asked if that was brought up in court, he admitted that he wasn’t in court.

“I’m not gonna discuss that in particular. I would only talk about the back-story that a lot of people don’t know,” Storm said.

Boyea suggested to Storm that he surely could understand people’s outrage that if none of this was brought up in court how did Farrell end up at the Mental Health Centre.

But Storm stressed that it was the magistrate who sent Farrell for a psychiatric evaluation.

“And he, in his judgment, decided to do that. And it was not just about cursing someone in public. I have been cursed in public several times. No one has ended up in jail. But no one has stalked me through the streets. No one has threatened to kill my children.”

But Boyea reiterated that none of this was brought up in court.

“That’s just your allegations. That was not brought up in court,” Boyea said.

Storm then invited persons to visit Farrell’s Instagram page, and Boyea reiterated that this was not brought up in court.

“One thing I can’t tolerate is giving these half sided stories,” Storm said.

“But it is not half sided,” Boyea responded. “You had the opportunity in court to present that this young lady was a threat.”

“The problem I see you are having with this case and I have listened you for the last half hour, is that people are scared and they don’t want to think that they could curse someone in the road and then they can be sent to the Mental Home,” Storm charged.

“But that is not the case. That has not happened in St. Vincent and the Grenadines.”

Boyea, however, maintained that it has happened in Farrell’s case.

“You do not need to be a psychiatrist or something to see that something is up with the young lady,” Storm said.

“But hang on a minute. Are you a doctor now?” Boyea responded.

“You don’t even want to call her a former model. How is she even able to carry on the activities of a model if she is not sound mentally?” Storm said.

Boyea told him that that was conjecture on his part.

“What is worrying people, Storm, is that you go to court, none of this stuff is brought up that she was a threat, she was stalking… She was asked to plea. If she was not mentally competent, why was she asked to plea? You can see why people are getting nervous about it?” the radio host commented.

But Storm said that in the magistrate’s decision, “he would have said that this lady is not, in his judgment, maybe she is not able to plea. Once you are mentally unfit, you cannot plea”.

“So why did he ask her to plea then?” Boyea said.

“Well, I have no idea, you have to ask him,” Storm responded.

“You are the one who brought it up that she is not mentally stable.”

“Cause she is not mentally stable if you look at the background of this lady,” Storm said.

Boyea asked Storm to ignore the family ties and try to look at the situation objectively.

Storm, however, said that he cannot do that because his sister in law is one of the kindest people you’d ever meet.

“And a crazy person has decided to fixate on her and her family, threaten to do harm to her and her family, right? And we have seen recently what happened. There was a killing spree about a year and a half now, a year and a bit ago. A few years ago, someone chopped off — a mentally ill man chopped off somebody’s head in Tokyo in broad daylight,” Storm said, referring to a case in 2006.

“You know? And everyone going now and say ‘Where’s the police? Where’s the mental health authorities?’”

Boyea again asked Storm why none of this was brought up in court.

Storm said that Boyea was insinuating that Vincentians are living in a police state and no one has freedom of speech and if one curses someone, he or she could be sent to the psychiatric hospital.

“I am not a representative of the court–” Storm retorted.

Boyea told Storm that he (Boyea) was basing his discussion on the iWitness News story and that he had spoken to “the various lawyers” and none of the points that Storm was raising on radio were raised in court.

But Storm said he had no idea whether the magistrate knew the “back story”.

“I want to shed light because people are worried and they shouldn’t be worried because the young woman has displayed a history of mental illness. So no one should be worried that people could just be–”

The host told Storm that all Vincentians “must be worried” after the development, adding that just Friday his show spoke about the injustice being doing to poor people in SVG.

“This isn’t a one-off. We have been speaking about this for years. This is not a one-off, Storm. And this is like a culmination of all the fears that people have. That you go to court, none of the information that you are presenting was presented in court. The young lady was even asked to make a plea. If she was mentally incompetent, she shouldn’t have been asked to plea or if there is some doubt about her mental competence, she shouldn’t’ have been asked to plea. And now you are telling me that everything is hunky-dory.”

Storm, however, said he was not there to discuss the court case.

“I am here to discuss the back story which everyone is ignoring. Everybody thinks that this is a young lady who mouths off and she is being dragged in, and it is because of who she mouths off to.”

Farrell created a storm on social media from her ward at the Mental Health Centre on Saturday, when she took to Instagram, an Internet-based photo- and video-sharing application, and posted some 20 vidoes in which she name a number of allegations, including that she had a sexual relationship with a prominent, married Vincentian man.

In the videos, she commented on her modelling career, saying that she used to be in more than one modelling agency and could have been doing a lot of things in modelling had she not decided to take a break.

She, however, said that she now has a lot of songs written down and can go to studio and record them and also a lot of inventions.

Farrell said that she illuminates herself and she is the one who brings down the inventions, adding that she doesn’t want to brag about her talents but want to do the action so people can know what she is about.

The woman said that she has a lot of things she is going to do for the new year for her fans and has gone “down ah de church” and had cleansed her soul, wash out all the badness inna it”

Right now her “merkabah ah spin. They don’t know nothing about merkabah and can’t even spell it,” she said.

Merkabah/Merkavah mysticism (or Chariot mysticism) is a school of early Jewish mysticism, c. 100 BCE – 1000 CE, centred on visions such as those found in the Book of Ezekiel chapter 1, Wikipedia says.