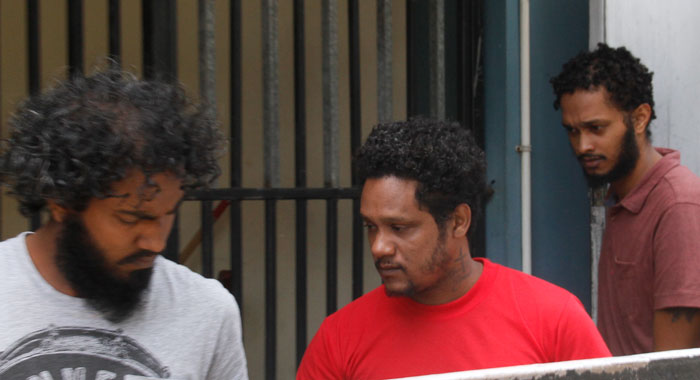 The three St. Lucians involved in the automated teller machine (ATM) scam that netted more than EC$66,000 in cash last March were jailed on Wednesday.

He had also pleaded guilty to the charge of having in his possession on March 12, 2017 in Kingstown, articles, namely four ATM cards, for use in the course of theft.

He further pleaded guilty to possession of criminal property, to wit EC$4,250, on the same date.

Mario Chitolie, 26, pleaded guilty to five counts of theft, amounting to EC$2,460, committed in Kingstown, Calliaqua and Bequia between March 10 and 11, 2017.

Harry, Chitolie, and Aaron Kadoo, 31, pleaded guilty to a joint charge that between March 9 and 12, 2017, in Kingstown, they agreed with each other that a course of conduct, namely theft, shall be pursued.

Chief Magistrate Rechanne Browne-Matthias sentenced Harry to 154 months in prison for his crimes.

However, he will only serve 18 months of the time, since the sentences would run concurrently.

He was sentenced to 18 months in jail for possession of criminal property and received sentences ranging from two weeks to 12 months for the theft charges.

Chitolie was sentenced to 48 months in prison but would only serve 18 months of that time.

Eighteen months was the penalty handed down to the men — on the joint charge of conspiracy to commit theft.

Chitolie also received sentences ranging from one week to 12 months for theft.

However, unlike Chitolie and Harry, Kadoo will spend two and a half years incarcerated in St. Vincent and the Grenadines. That is the longest individual sentence the court handed down on him in response to the various charges against him.

His sentences total 64 months but will run concurrently.

The court imposed the 30-month sentence on Kadoo for possession of criminal property, to wit, EC$66,600 in cash.

He was also sentenced to 18 months in jail for being in possession of articles, to wit, 121 ATM cards, to be used in the course of theft.

Harry was sentenced to eight months on a similar charge — being in possession of four ATM cards.

The time spent on remand will be considered as part of the men’s sentences.

The court also ordered restitution of the monies the men stole.

On March 12, 2017, detectives from the Major Crime Unit had nabbed Harry committing the illegal ATM withdrawal at the Bedford Street branch of the Bank of St. Vincent and the Grenadines.

They found four white and black ATM cards and EC$4,245 in cash on his person.

The Crown’s case was that the men came to SVG via boat in March 2017 but did not clear with immigration officials.

They are said to have brought with them a quantity of white and black ATM cards that they used to access different accounts at BoSVG and the General Employees Co-operative Credit Union.

Karim Nelson appeared on behalf of the Crown.

2 replies on “St. Lucians jailed for ATM scam in SVG”