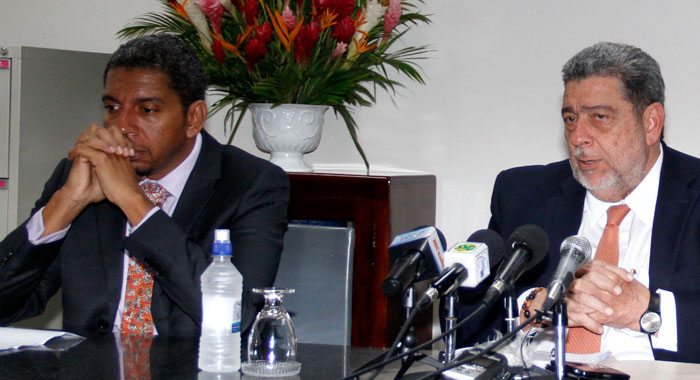 Prime Minister Ralph Gonsalves says he has advised his son and Finance Minister, Camillo Gonsalves, not to comment on an ongoing scandal in which a model has claimed that she had a sexual relationship with him.

The model, Yugge Farrell, 22, of Lowmans Bay, made the claims in videos that appeared on social media on Saturday, one day after Kingstown magistrate, Bertie Pompey, ordered that she undergo two weeks of psychiatric evaluation.

“And let me say this, I have advised Camillo to say nothing at this stage; to say nothing yet,” the prime minister said on Thursday, Jan. 11 in a call to Shake-up on WE FM.

“Sir Louis [Straker] has advised him similarly,” the prime minister said, referring to his deputy.

She pleaded not guilty when she was arraigned last Friday and the prosecution then asked that she be sent for psychiatric evaluation.

The prosecution gave no evidence to support their application and the woman was institutionalised amidst strong objection by her lawyer, Grant Connell.

The development had occupied much of the public discussion since iWitness News broke the story last Friday.

“I know that some talk show host who went off on the deep end and when they realised that they were in error to have gone off, they’re now comparing Camillo and Ralph.

“They are saying, well, you know, though it wouldn’t affect Camillo in his constituency, it might affect him in leadership stakes, because you know if it was Ralph, Ralph would be out there blazing guns, taking on everybody who wants to be taken on and that Camillo should be the same.

“But what they want is their mayhem to be added to…. But …, at the appropriate time, I will have things to say. But I am very concerned that this young lady should get good treatment to address the concern of mental health, which the magistrate was seized of,” Gonsalves said.

Storm Gonsalves, the prime minister’s youngest son, said on Hot 97 FM on Monday that Farrell, whom he described as having “succumbed to mental illness” had threatened Camillo and his family.

“I don’t bother on foolishness. And at the appropriate time, I would talk about certain things.”

The prime minister reiterated that he has expressed his concern about Farrell said, “… clearly, the persons who have been wronged are Karen, her 7-year-old daughter and Camillo.

“And they didn’t do any wrong. They have been wronged.”

He said there are some “fellas on some talk shows” with a lot of hypocrisy and some of them “start to back-back like soldier crab, as we would say in Colonarie, when certain other things were revealed and then trying to change the story hither and thither.

“Now, as people get to know the information, as it is coming out, and a lot hasn’t come yet. Much has come but still a lot hasn’t come. And that is why the Human Rights Association’s statement, that they were advising people to be careful about what they say, what they transmit, because of possible violations of the criminal law and that’s wise advise.”

On Wednesday, the St. Vincent and the Grenadines Human Rights Association issued a statement saying that the magistrate had acted in accordance with the law.

The rights group further urged against the sharing of defamatory material said to be connected with the scandal.

Also on Wednesday, Daniel Cummings, Member of Parliament for West Kingstown — where Farrell lives — expressed concern about the process through which Farrell was sent to the psychiatric hospital for two weeks’ evaluation.

Cummings, an opposition lawmaker, said that he was not trying to score political points as he knows Farrell’s family very well and they have told him repeatedly that they are staunch supporters of the ruling Unity Labour Party.

“I am saying this is a matter of human interest and no person’s daughter should be treated like that, regardless of political status,” Cummings said.

10 replies on “PM tells Camillo not to comment on scandal”