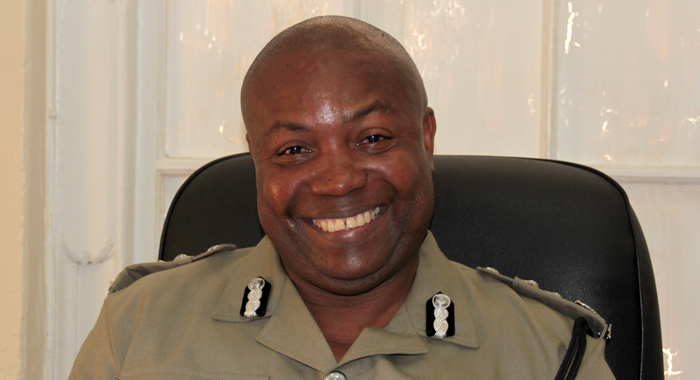 Colin John, seen here in an August 2016 iWitness News photo, when he was acting deputy police chief, is now actin Commissioner of Police.

Governor General, Sir Frederick Nathaniel Ballantyne, acting on the advice of the Police Service Commission (PSC) given with the consent of Prime Minister Ralph Gonsalves, has granted approval for the acting appointments effective Jan. 2, 2018 until further notice.

John brings tremendous experience and knowledge to the organisation which he now leads. He was enlisted in the Royal St. Vincent and the Grenadines Police Force in 1988. After serving the organisation for 23 years, he was transferred to the Office of the Director of Public Prosecutions in 2011 and appointed as the Assistant Director of Public Prosecution.  He served in that position until 2016 when he rejoined the Police Force at the rank of acting Deputy Commissioner of Police.

John also represented the Government of SVG at the 12th Conference of Defense Ministers of the Americas (Preparatory Meeting) in Trinidad and Tobago in April and October 2016.

He was previously appointed to act in the position of Commissioner of Police from Sept. 4 to Oct. 31, 2017, as a consequence of the absence of the acting police chief, who was on vacation leave.

Meanwhile, Joseph, a veteran police officer, was enlisted in the Police Force on July 10, 1987. His previous postings included Immigration Department and the Police Training School.

In 2005, he pursued studies at the University of Buckinghamshire in England. He graduated in 2008 with a Bachelor of Science Degree in Criminological Psychology.  Upon his return from studies, he was appointed to the post of acting Director of National Commission on Crime Prevention (NCCP).

He was later reassigned to the Police Department and on Nov. 20, 2012, and was appointed to the post of Assistant Commissioner of Police in charge of Crimes.

The acting Deputy Commissioner of Police recently served as the Ground Commander of the Regional Security System (RSS) Forces who were performing humanitarian security duties in Dominica.