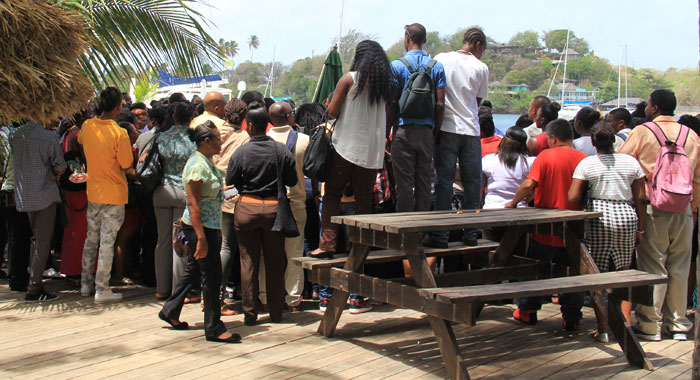 Hundreds of persons, including Community College graduates, responded to KFCs open call for vacancies in 2015. The IMF says that in 2017 youth unemployment in SVG was 46 per cent. (iWN file photo)

That’s according to the statistics presented by the International Monetary Fund (IMF) in the 2017 Article IV Consultation Staff Report for SVG.

“Those who feel it knows it. Others may say it’s even more,” Leader of the Opposition, Godwin Friday said on Wednesday as he commented on the report at a New Democratic Party press conference in Kingstown.

“You hear about all the magical things done to this economy by the ULP and the unemployment rate, according to the IMF, today, at 25 per cent is higher than it was in 2001, at 20.9 per cent.”

Friday said that “even more alarming” is that youth unemployment is “a staggering 46 per cent”.

Youth, according to the IMF report, refers to persons 15-24 years of age.

“This is the IMF report, based on information provided by the government. You know, they talk about transparency and accountability but very little information tends to be made actually public. But this is information that was presented and they (the IMF) made their calculations.”

Friday said he does not doubt that the figure is higher than this, saying a lot of young people leave school and stop trying after not finding a job in three years.

Female unemployment rate was at 30 per cent.

The report said unemployment was highest among graduates of secondary schools, while most university graduates were employed — reflecting more international labour mobility and professional opportunities.

Agriculture, and wholesale and retail absorb more workers (each around 13 per cent of total workers).

Agriculture employs mostly low-skilled workers (educational level of primary or less ), while wholesale and retail workers are equally distributed among most educational levels except that of a university degree. Of university graduates, 55 per cent work either in the public sector, education or health services.

The report said that around 24.3 per cent of the population is inactive. Nearly one-half of inactive are retired or in school. Health conditions, labour market restrictions and household obligations are other factors preventing people from seeking employment.