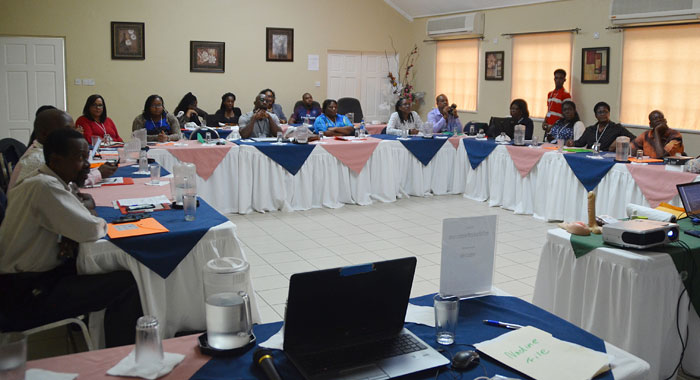 Participants at the workshop last week.

CASTRIES, St. Lucia (iWN) — A number of Caribbean media workers have received training in dealing with gender and other human rights matters in their media products.

The training came in the form of a two-day workshop on the topic “Integration of a Gender Lens and Human Rights Focus in Journalistic Practice” that wrapped up here on Thursday.

The training was organised by the Caribbean Association for Feminist Research and Action (CAFRA), with sponsorship from the Canadian government.

Speaking at the end of the workshop, Flavia Cherry, regional chairperson of CAFRA told iWitness News that the worship gave her organisation an opportunity “as feminists and as women” to work with journalists.

“It was amazing to see the level of participation and interest and the kind of support that journalists at the workshop agreed to provide. In fact, it was not too difficult because a lot of them were able to understand a lot of the gender issues, so we feel right now that with their better understanding of the gender issues that it would definitely redound to a better society in our countries,” Cherry told iWitness News.

“What we are asking for is fairness to both sexes and to ensure that there isn’t bias, the kind of bias that allows the society to discriminate against persons on the basis of anything. We think that individuals have their inalienable human rights and we really push very much for ensuring that in all our societies we have an understanding of those rights and respect the dignity of all persons.”

She said there are quite a few Caribbean media workers who are conscious of these issues.

“Some maybe not so much and that is why this kind of training is really critical and important.”

Meanwhile, president of the Association of Caribbean Media Workers, Wesley Gibbings, told iWitness News that the workshop provided participants with an opportunity to reflect “on our performance when it comes to this area of public affairs, public matters.

Gibbings said he thinks that regional media workers, are making an attempt to reflect the reality of Caribbean societies.

“And that came across very strongly when it came to the open discussions from the floor.”

He, however, said that there is room for improvement in the regional media coverage of gender and human rights issues, “particularly with respect to being sensitive in our coverage of some of the issues that are affecting our countries and the workshop was very useful in terms of highlighting some of the areas that activists in the area are concerned about”.

Gibbings said he thinks that regional journalists have a “pretty solid” awareness of the issues raised in the workshop.

“I learnt the way how to speak concerning when issues happen in the news and when you have to relate those issues. It’s not any how you can go and just talk about those issues. You have to be very sensitive about certain things that you talk about.”

He said that his understanding is that as a media worker he doesn’t have to please anyone.

“But you have to be mindful of people who are different, who carry different view than yourself. So, when reporting, you must be very sensitive,” said Leonty, who also told iWitness News that the St. Lucian media does not pay a lot of attention to gender and human right issues.

“More needs to be done,” he said, adding that he thinks that the workshop would help very much in putting gender and human rights issues on the front burner.