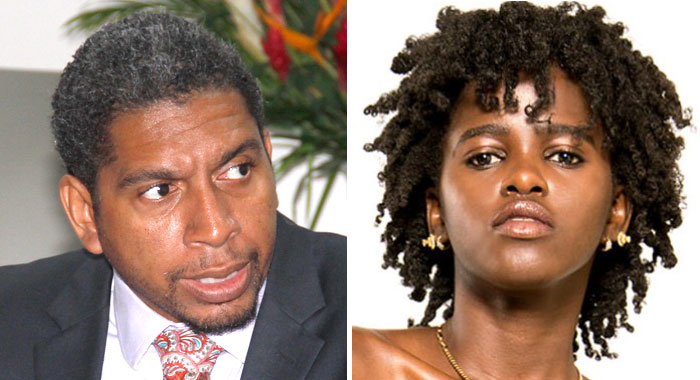 The ongoing debate about the alleged past relationship between Minister of Finance Camillo Gonsalves, 44, and former model, Yugge Farrell, 22, is about “a love affair” and not politics.

That is as far as Yugge’s mother, Gailene Farrell, is concerned.

“Wha’ I could see, was like a love affair. I didn’t really see it as no politics. I see it as a love affair. Seeing as he is a minister of government, you done expect these things go happen,” Gailene told iWitness News on Tuesday.

The widespread debate about Yugge’s arrest and charge on Jan. 4 with using abusive language to Karen Duncan-Gonsalves, wife of Minister of Finance, Camillo Gonsalves, has included excursions into politics, especially since a video of Farrell saying she was involved in an extramarital relationship with Camillo appeared on the internet on Jan. 6.

Farrell has been a patient at the Mental Health Centre since Jan. 5, as per a court order and returns to court next Monday, for the second time in as many weeks, when Senior Magistrate Rickie Burnett will give his decision on legal arguments presented by the defence and prosecution this past Monday.

The psychiatric hospital has submitted to the court a report that says that Farrell is unfit for trial and the Director of Public Prosecutions, Colin Williams, has asked that she be sent back to the Mental Health Centre for further treatment.

Gailene said she sees the love affair as between Yugge and Camillo.

The mother told iWitness News that Member of Parliament for West Kingstown – where she lives — Daniel Cummings was correct when he said that the family has told him repeatedly that they are long-time supporters of the Unity Labour Party.

“Me ah supporter from since Mr. Hudson Tannis. Not now; long time. And as me know De Comrade (Prime Minister Ralph Gonsalves) so long, me and De Comrade go down good and thing, so I saw I think De Comrade woulda look for me in a better way,” said the woman, who also told iWitness News that she discussed in 2017 with the prime minister, the relationship that her daughter allegedly had with his son.

Gailene said that as a mother, she would like to say to the people of SVG that she considers that Farrell is her daughter.

“And everybody looking and feel, well, just like she ain’t have nobody, because like me ain’t coming forward, the father ain’t coming forward and say nothing,” said Gailene, who told iWitness News that she missed Monday’s court hearing because a doctor had told her that her daughter would not have been in court.

She said she and Yugge’s father, Calvert Charles, have been coping amidst the public debate and have been receiving encouragement from many persons, who have been telling them to hold the faith.

Tuesday’s interview took place at the chambers of lawyer Kay Bacchus-Baptiste in Kingstown, where Gailene had told us to meet her when we contacted her Monday night.

Farrell said that she had contacted Bacchus-Baptiste, who is also an opposition politician, seeking help for her daughter.

It was noted to Bacchus-Baptiste that she is a politician and this would trigger the allegation of political motivation.

“Well, people would realise that this was Kay Bacchus before I got into politics. I’ve always been on the side of the underdog, helping poor people. I’ve done so much pro bono work for people. When it comes to human rights and especially women’s rights, I’ve always been three. I’m only in politics about — not even a year. So then, anybody who is being fair and honest would realise this is the type of thing I would do.”

Asked to respond to the view that she has only been in electoral politics for a year but has been in politics for longer than that, Bacchus-Baptiste said:

“Not politics. I have been a social activist for that very same reason: helping people. Helping the underdog, seeking people’s right. That’s what I have always been involved in.”

Bacchus-Baptiste has also spoken about the developments in the Yugge Farrell case at a press conference held by her New Democratic Party and on a number of radio programmes.

9 replies on “Yugge-Camillo saga about ‘love’, not politics — mother”