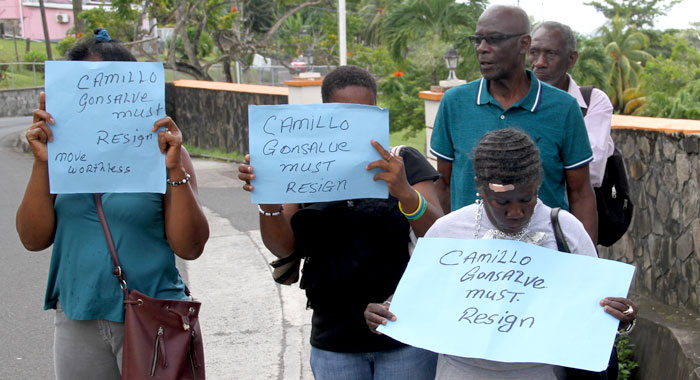 Protester Susan Duncan looks at her placard after the error in the spelling of the FInance Minister’s surname was pointed out to her. (iWN photo)

Minister of Finance Camillo Gonsalves and his wife, Karen Duncan-Gonsalves, were greeted by a handful of placard-bearing protesters calling for the minister’s resignation on Thursday when they arrived at a lunch meeting with the business community in Villa.

“Camillo Gonsalve (sic) must resign,” was the main message of the placards held by the half dozen protesters on the main road outside Beachcombers Hotel ahead of the minister’s arrival.

When iWitness News pointed out to the protesters that the “s” at the end of “Gonsalves” was missing, Susan Duncan, a resident of North Central Windward, which Prime Minister Ralph Gonsalves, Camillo’s father, has been representing in Parliament for almost a quarter century, said to the other protesters, “Is ‘Gonsalve’ or ‘Gonsalves’?”

Seemingly convinced that the surname, in fact, ends with an “s”, the woman took out a marker from a bag and corrected the error, in time for the minister’s arrival.

When Camillo and Karen arrived at the event, Executive Director of the Chamber of Industry and Commerce, Anthony Regisford greeted them.

The event was the first business luncheon that the chamber is holding for the year and came three days before Camillo is slated to deliver to Parliament his first estimates of income and expenditure, having been made Minister of Finance last November.

In greeting Regisford, Camillo said that he hoped that his presence had not attracted too much unwanted attention to the event.

He also pointed out that he had brought his wife although he had not indicated that he would have done so and, seemingly light-heartedly, expressed hope that this would not inconvenience the organisers.

At the beginning of his speech at the luncheon, the Finance Minister said, light-heartedly:

“I want to endorse also, Captain Bligh. I don’t drink, I don’t eat meat, when I talk about ganja later, I will tell you I don’t smoke. But, of course, listening to all the rumours about me these days, it’s because I have so many other vices that I can’t accommodate those.”

The protesters called for the resignation of the minister, 44, amidst the ongoing scandal in which model Yugge Farrell, 22, said she had a relationship with him that ended in 2016.

Farrell made the allegation in videos posted to the internet on Jan. 6, one day after then Kingstown Magistrate, Bertie Pompey, ordered that she be taken to Mental Health Centre for two weeks of psychiatric evaluation.

The order on Jan. 5, came as Farrell appeared in court, charged that on the previous day at Kingstown, she called Duncan-Gonsalves, a senior crown counsel, a “dirty b***h”.

Farrell was sent to the psychiatric hospital amidst protests by her lawyer, Grant Connell and in the absence of any supporting evidence by the prosecution.

She returned to court last Monday and recently installed Senior Magistrate Rickie Burnett, who is also magistrate for Kingstown, reserved until next Monday his ruling on arguments by the prosecution and defence regarding a psychiatric report saying that that Farrell is unfit for trial.
The minister is yet to comment on the ongoing saga and the prime minister has said that he has advised the younger Gonsalves to maintain “a dignified silence” and to not say anything as yet.

The main opposition New Democratic Party has called on the minister, who is also Member of Parliament for East St. George, to explain himself or resign.