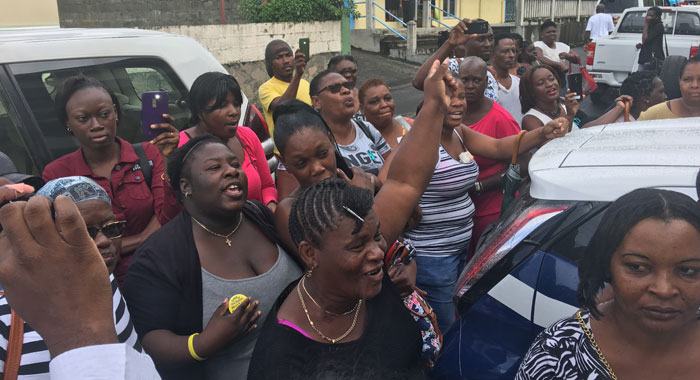 The National Council of Women in St. Vincent and the Grenadines, on Monday, welcomed the decision by Senior Magistrate Rickie Burnett to grant bail to former model Yugge Farrell.

The 23-year-old woman was granted bail after spending three weeks of court-ordered hospitalisation at the Mental Health Centre.

Her interaction with the judicial system came when she was brought before then Kingstown Magistrate Bertie Pompey on Jan. 4, on a charge that she used abusive language at Karen-Duncan Gonsalves.

Farrell later alleged that she had a sexual relationship with Duncan-Gonsalves’ husband, Minister of Finance, Camillo Gonsalves, 44, which she said ended in 2016.

On Monday, after receiving a second psychiatric report, Burnett granted Farrell EC$1,000 bail with one surety and ordered her to return to court on Dec. 17, 2018.

Speaking to iWitness News outside the Kingstown Magistrate’s Court after Monday’s proceedings,

Beverley Richards of the National Council of Women said that she was happy that Farrell was granted bail.

“I am happy that it turned out this way, and we do hope that the final judgement is in Yugge’s favour and she gets her fair justice,” Richards said.

iWitness News noted to Richards that  Farrell was granted bail but still has to come back to court in December.

“Well, I am happy that she doesn’t have to go back to the mental asylum,” Richards said.

We noted in the interview that another woman, Duncan-Gonsalves is the virtual complainant in the matter and Richards said, “Yes, but the charges that were brought against Yugge, they are minor charges.”

iWitness News noted that Duncan Gonsalves must have felt that her rights were violated, hence her complaint to the police, resulting in the charges.

“Are you saying that the charges should not have been brought?” iWitness News asked the women’s rights advocate.

A modest crowd of mainly women gathered outside the Kingstown Magistrate’s Court and celebrated Farrell’s release.

Among them was activist Luzette King and members of her activism group, “Frontline”.

King urged her followers, composed of supporters of the main opposition New Democratic Party, not to harangue Duncan-Gonsalves when she leaves the court.

“Please, nothing to Karen,” King said.

“Please, do not say anything to Karen. We are all victims in this. All of us,” she said.