‘I erred by entertaining the amendment’ – House Speaker Jomo Thomas 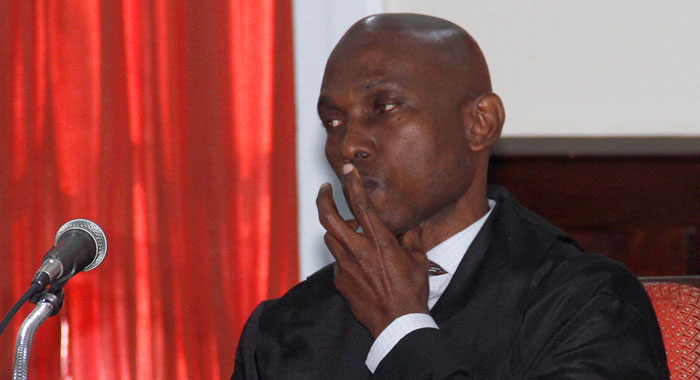 Speaker of the House of Assembly, Jomo Thomas said Thursday that he “erred” when he allowed the government to amend the opposition’s motion of no confidence brought against it.

“A similar motion will meet a much more enlightened Jomo, if I am the speaker. I do not think we arrived at the right decision yesterday,” Thomas said in comments on a post by Facebook user Ovid Burke.

In his post, Burke said he had two questions for Thomas:

Thomas had ruled on Wednesday against a submission by government lawmakers that majority support is needed in the house before lawmakers debate a motion of no confidence.

He, however, allowed an amendment to the motion, which turned the opposition’s no confidence into a motion of confidence, which the government debated and passed when opposition lawmakers did not return to Parliament for the post-luncheon sitting.

Thomas’ decision came after three hours of debate over whether the no confidence motion should be debated.

He had grilled Prime Minister Ralph Gonsalves over his argument and at one point asked the leader of the house if he was suggesting that the only way a motion of no confidence could be debated was with majority support.

However, based on his comments on Facebook, Thomas was clear one day later on how he should have ruled, saying in another comment on Burke’s post:

“There is no way a constitutionally mandated provision can be negatived by an amendment. Once I ruled that the motion could not be voted down before a debate the only other thing left was for the debate.

“I erred by entertaining the amendment. It was a new area and both the standing orders and the ‘bible’ on Parliamentary practice spoke to amendments,” he said, referring to the book, “Erskine May: Parliamentary Practice”.

“However, since the constitution is supreme and it speaks to a procedure for a motion of no confidence. [Nothing] parliament does could have negatived the constitution,” Thomas said, adding that he came to the realisation while running on Thursday morning.”

Section 47(2), of the Constitution, which speaks to a vote of no confidence, says:

(2) a. If notice in writing is given to the Speaker signed by not less than three Representatives, of a motion of no confidence in the Government the Speaker shall) if the House is then sitting or has been summoned to meet within five days, cause the motion to be considered by the House within seven days of the notice; or

The no confidence motion, which was signed by the seven opposition parliamentary representatives, was delivered to the speaker on Monday, during a meeting of Parliament.

The prime minister, noting the importance of the motion, set the debate for Wednesday.

Thomas’ comments came even as Leader of the Opposition, Godwin Friday, has said that his New Democratic Party will go to court over the speaker’s ruling.

He said preventing the debate of the motion of no confidence was “totally unconstitutional”.

“… it’s against the law and we will challenge it in the court. What was done today goes against the constitution of St. Vincent and the Grenadines, a constitution that many people have fought for before us to make sure that we have those freedoms guaranteed for us,” Friday told NDP supporters at a rally in Kingstown Wednesday night, which had been planned before the day’s developments.

He said one of these freedoms is that the opposition can bring a motion of no confidence in parliament and that is supposed to be debated and if it passes, the government falls.

“This is protected in the Constitution. We had an interpretation given today in the house of parliament that says you could only bring a motion of no confidence if the other side allows you to do so. Ah tell Ralph Gonsalves in the Parliament today if we had a constitutional law exam, you would get an F– because that interpretation does not hold,” Friday told party supporters at the rally in Kingstown.

Friday said that when a motion of no confidence is brought, the opposition should be able to debate it and that is what has happened in the past and elsewhere in the Caribbean and in the British Commonwealth.

“What has happened today is a violation of our Constitution. When you violate our constitution, you violate our rights and I tell you we will make sure that this right is protected for the people of this country and we will defend it in the court of law.”

During the debate about the course of action that should be taken on the motion, Prime Minister Ralph Gonsalves had also suggested that Attorney General Jaundy Martin take the matter to the high court for an interpretation.

Thomas agreed with the suggestion but added that he did not accept that the debate should be detained on that account.

However, when the debate was about to begin, the prime minister rose and proposed an amendment to the motion, which he presented, type-written and signed by the eight government lawmakers.

After much further debate on the way forward, including consultation of Erskine May, the speaker allowed the amendment and debate on the amended motion.

Correction: An earlier version of this story said that seven of the eight government lawmakers signed the motion of confidence. It was, in fact, all eight who signed.