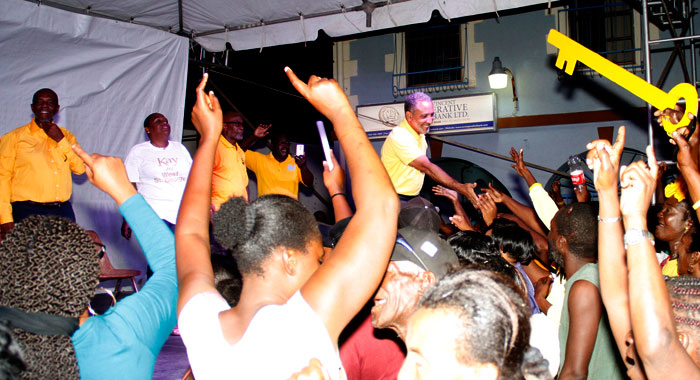 Leader of the opposition and President of the New Democratic Party, Godwin Friday, greet party supporters at the rally in Kingstown. (iWN photo)

Leader of the New Democratic Party, Godwin Friday says St. Vincent and the Grenadines is experiencing a political and economic crisis and has called on party supporters to spread a message of hope.

“We have a political crisis in the country because we had an election in 2015 and we still don’t know if the government was duly elected. We believe they were not and that is why we have these petitions in the court. That is a political crisis,” he told a party rally in Kingstown Wednesday night.

Friday said that matter will be resolved soon, a reference to the two petitions his party has filed challenging the result of the vote, which said the Ralph Gonsalves government was returned to office — for a fourth term — by a second one-seat majority.

“We have an economic crisis in this country. Ask the farmers how it is that they are making a living,” he said, adding that at an NDP consultation in Fitz Hughes recently, a farmer said that all the fields that he used to cultivate are now growing grass.

“This is all over the country. We can do better.”

Friday, who is also Leader of the Opposition, said that the agriculture ministry was given to Saboto Caesar, whom he noted, had spoken plainly in the parliament earlier that day when he said that the prime minister does not have the legal or moral authority to speak for him.

Caesar made the point as the opposition was trying to get the government to rule in its favour and allow debate of a motion of no confidence, rather than the confidence motion that the government’s amendment turned the original submission into.

“They gave it (agriculture ministry) to Saboto Caesar and the Ministry of Agriculture is completely without leadership and direction because they are moving from one project to another — seem to be dictated by politics — not by anything to do with making anything,” Friday said.

“This is where the country is today. But, brothers and sister, we can do better. Don’t let anybody tell you that things are so bad in St. Vincent but they could be worse if it wasn’t for them. We have seen under past NDP governments that this country progressed,” he told party supporters at Heritage Square.

Friday called on NDP supporters to spread a message of hope in the face of what he said were difficult times.

“We are busy trying to make ends meet. But, in the meantime, what is happening in our country, in St. Vincent; we can’t recognise ourselves anymore because we have lost so much. There are those who seem to be hell-bent on taking our dignity from us as a nation, economically,” he told the rally.

Friday, who is also Member of Parliament for the Northern Grenadines, said that things in St. Vincent and the Grenadines are difficult and people go along everyday trying to feed themselves, send their children to school, pay their bills, and meet the cost of medical emergencies.

“If you can’t make a living, you have to go and beg somebody. Poverty takes your dignity away from you. If they keep you poor, they keep you dependent and they figure that way they would control how you vote,” he said of the Gonsalves-led Unity Labour Party government.

He said NDP supporters have to commit themselves to say that they will come out whenever the party calls.

“You are not just coming to support NDP. You are coming to defend your country. You’re coming to stand up and to say, ‘We want a better St. Vincent and the Grenadines.’

“So, let us, tonight, commit to this as the start of something. It is not the end; we are not going to stop until we change government in this country.

Some persons who voted for the ULP, including in the last election, say that under the NDP they were doing better, Friday said, adding that some of these persons had supported the ULP for change but say no more.

He said the NDP must bring about a change but can’t do it without the commitment of all the people at the rally.

He said the NDP is a lawful people and will change the government through legal means.

“Because we want to see a brighter day.”

NDP supporters have to reach out to people who support or supported the ULP, Friday said, telling NDP faithful that some ULP supporters are confused.

“They feel that they have this blind loyalty to a political party that makes promises to them and every election passes, the promises get sweeter but they deliver less.

“So we have to encourage them. You have to commit with us that you will go out and spread this message. You will encourage them to say your country comes first, not just political party and that we all have to try and make things better as we can do.

“And I promise you that for us here, the leadership of the NDP, we will govern for everybody in St. Vincent and the Grenadines. That is the only way that we can progress. It is in our own self-interest to do so. But more than that, it is our own commitment because that is the best way for us to go forward as nation.”

He said the nation cannot do well when one half is doing well and the other is catching hell.

“How can you live comfortably when you see your neighbour is struggling? We should be able to help each other, to pull each other up. You vote at election time, but after that, you have to work together, because that is the only way you can build our country,” Friday the NDP rally.